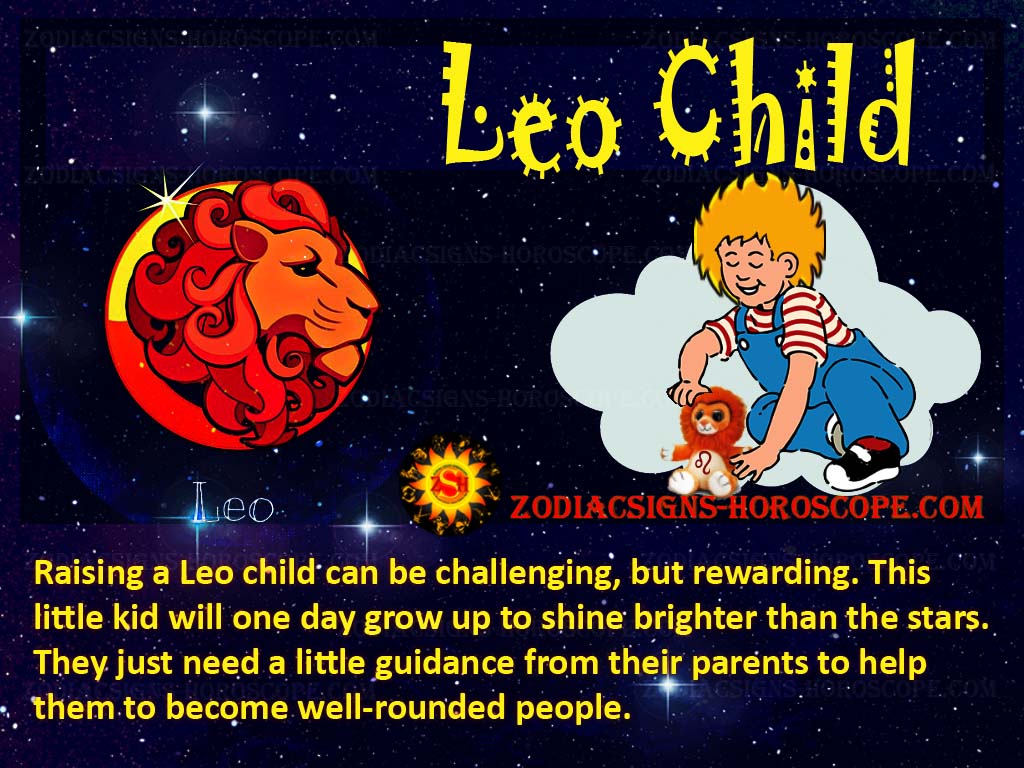 Leo Child (July 23 – August 22) doesn’t act like a child for long. As soon as she or she can walk and talk, they are out on their own. They try not to depend on their parents after they are out of diapers, but they will still do everything that can impress their parents.

Leo babies want people to be proud of everything they do. They can sometimes get upset when they don’t do their best or if someone is mean to them. They may act tough, but even the strongest Leo kids still need their parents’ love.

Leo hobbies and interests: The Leo child will be interested in just about anything that will put them at the center of attention. They will love doing sports that they know they excel at so that they can be the team captain. Drama is their thing, both in their personal lives and in their hobbies.

While they are young, Leo children are likely to take to the stage to get attention. When they get a little older, they may try to get into the student government or some other group that has important leadership roles in it. These hobbies will all help to give Leo a competitive edge that he or she will use for the rest of their lives.

Leo friendship compatibility: Leo kids like to do many activities both inside and outside of school. They love to put themselves out there, which makes making friends easy. Leo children just need to learn to watch their attitudes at times.

They love to be the leader, but kids don’t usually like it when one friend is the boss all of the time. Once Leo minors learn the importance of sharing and taking turns, their social life will bloom. These charming kids can make friends with just about anyone when they want to.

How Leo a child in school? The Leo child likes to join many school clubs and groups. As busy as they are with their social life at school, they still know the importance of doing well academically. Even from an early age, Leo children will start to plan for their futures.

Many Leo children will want to be doctors, lawyers, or something else that requires a lot of schooling. Because of this, they will try their best in school even when they are still in elementary schools. They are also sure to be one of their teacher’s favorite students.

Differences Between Leo Girls and Boys

Leo boys and Leo girls have many things in common, but there are a few differences to be aware of. Strangely enough, the girls are often louder than boys. They will laugh and sing, while the boys will act and cook.

They both have high self-confidence levels, but girls may need more help to keep those levels high. Both kids need to find some balance in their loud personalities. Girls need to learn what a healthy romantic and platonic relationship looks like, while a boy will need to be monitored on the dating scene a little more as he can be extremely charming.

The Aries parent would have a good relationship with the Leo child as long as the child respects his/her leadership position.

The joy and happiness of a Taurus parent would be seen in the attitude of a Leo child.

The Leo baby and Gemini parent would have unlimited fun together.

The sensitive nature of a Cancer parent would provide warm love and support to the Leo baby.

The Leo mother or father would be careful to ensure that they raise their children as confident beings.

The Leo baby would always command the love and care that the Virgo parent would be providing them.

The affectionate nature of the Libra parent would certainly impress the Leo baby.

The Leo kid has a sense of natural popularity that would keep the Scorpio parent impressed.

It is quite likely that the Leo child would push the Capricorn parent beyond their responsible and caring nature.

Both the Leo baby and Aquarius parents thrive on their social nature.

Pisces‘ parents would be glad that the Leo kid is as passionate as they are.

Raising a Leo child can be challenging but rewarding. This little kid will one day grow up to shine brighter than the stars. They just need a little guidance from their parents to help them to become well-rounded people.