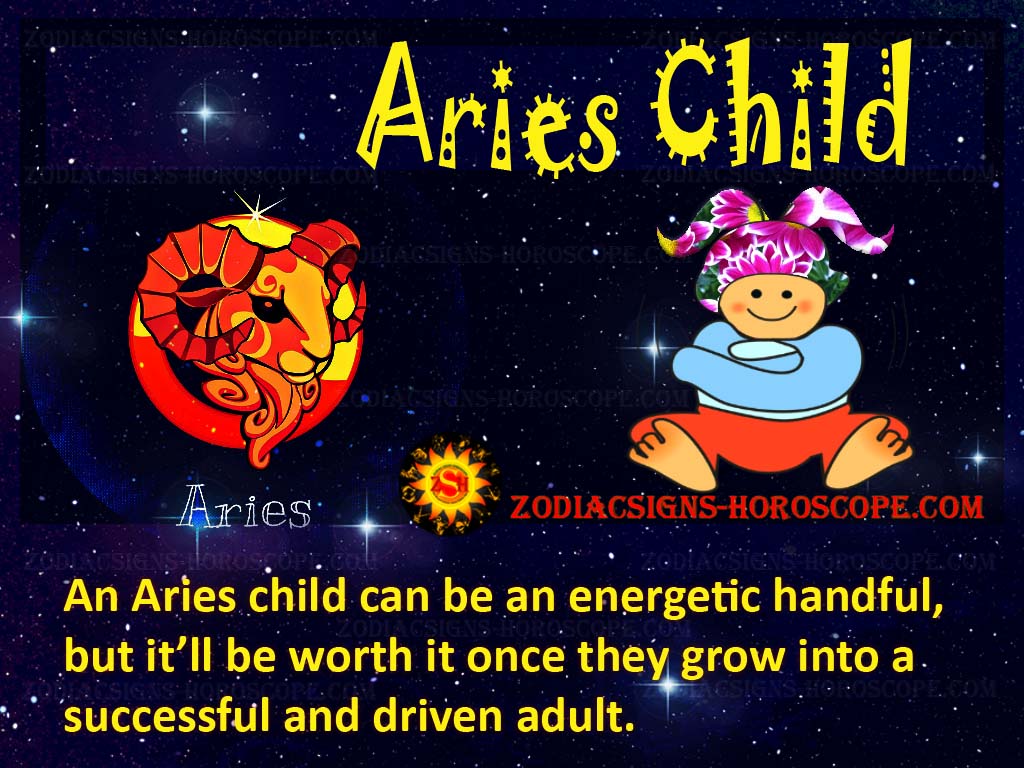 Aries Child (March 21 – April 19) makes fun and full of life. The kids are always looking for something to keep themselves entertained. They aren’t afraid to tell their parents or friends what they want. An Aries baby is fiercely independent, and he/she will do whatever they can to get what they want. Stubborn at times, and always energetic, any parent with an Aries child is in for a while ride!

Aries hobbies and interests: It seems like the Aries kids are always up to something. They like to keep busy as they get bored easily. There is never a dull moment with this child. They love to play games with their family and friends.

They are a stickler for the rules, especially when they make their own games. This can tire out parents at times, but an Aries kid won’t take a nap while their parents rest.

Instead, they will occupy themselves with something creative. Aries children love to draw pictures, make up their own games with dolls or trucks, and play outside alone or with friends.

Aries friendship compatibility: Even as children, Aries babies are natural leaders. They want to be able to take control of what’s going around them. This can sometimes make it difficult for them to make friends with other children who are also leaders.

They may need to learn not to be so bossy if they want to make friends with other children their age. Once they learn that they are not the boss of everyone, other children are sure to want to be their friend. After all, Aries minors make up some great games that other children will love to be a part of.

How Aries child in school? Aries people are always doing whatever they can to get ahead, even from an early age. They are likely to be teacher’s pets and to volunteer to help out with or lead projects in the classroom. Aries kids are likely to try to be class president and join other clubs in leadership roles.

They are likely to study hard for their classes. Sometimes Aries children can get frustrated while working on homework if the answer doesn’t come to them right away. They will need a parent or teacher to help them out when this happens.

They will try to do whatever they can by themselves, and they will not likely ask for help. Parents or teachers are going to need to be the ones to make the first move to help an Aries child. Getting help may frustrate them or make them feel like they aren’t smart or good enough to do something. They will need reassurance that everyone needs help sometimes to make them feel better.

Differences Between Girls and Boys

In most ways, boys and girls of the same sign have a lot in common. There are some slight differences that parents should be ready for. Aries boys are likely to be very competitive, just like Aries girls are, but they may not know how to let out this energy in a great way. Signing up an Aries boy for a sport is a great way to get out his competitive energy in a healthy way.

As two signs of the same element, the Aries child and Aries parent would fill each other with spontaneity.

The independent nature of the Aries kid might be a huge problem for the grounded Taurus parent.

These two make a great team together as they would be open to new and exciting experiences.

The good and caring parenting role from the Cancer parent would not be somewhat ideal for the fiery Aries kid.

Both the Leo parent and the Aries baby are high spirited in nature and therefore, might clash from time to time.

The aggressive and courageous personality of the Aries child would certainly surprise the Virgo parent.

The peace-loving Libra parent would be shocked by the impulsive nature of the Aries baby.

The sense of independence from the Aries baby would develop a passionate relationship with the Scorpio parent.

The Aries child and Sagittarius parents are highly energetic beings and so that they would crave excitement wherever they go.

The Aries baby would fancy the fact that the Capricorn parent would always take care of them responsibly.

The Aries baby and Aquarius parent would always laugh at the moments, so that makes their lives worth enjoying.

The Pisces parent and Aries child would strike a very good balance in their family life.

An Aries child can be an energetic handful, but it’ll be worth it once they grow into a successful and driven adult.