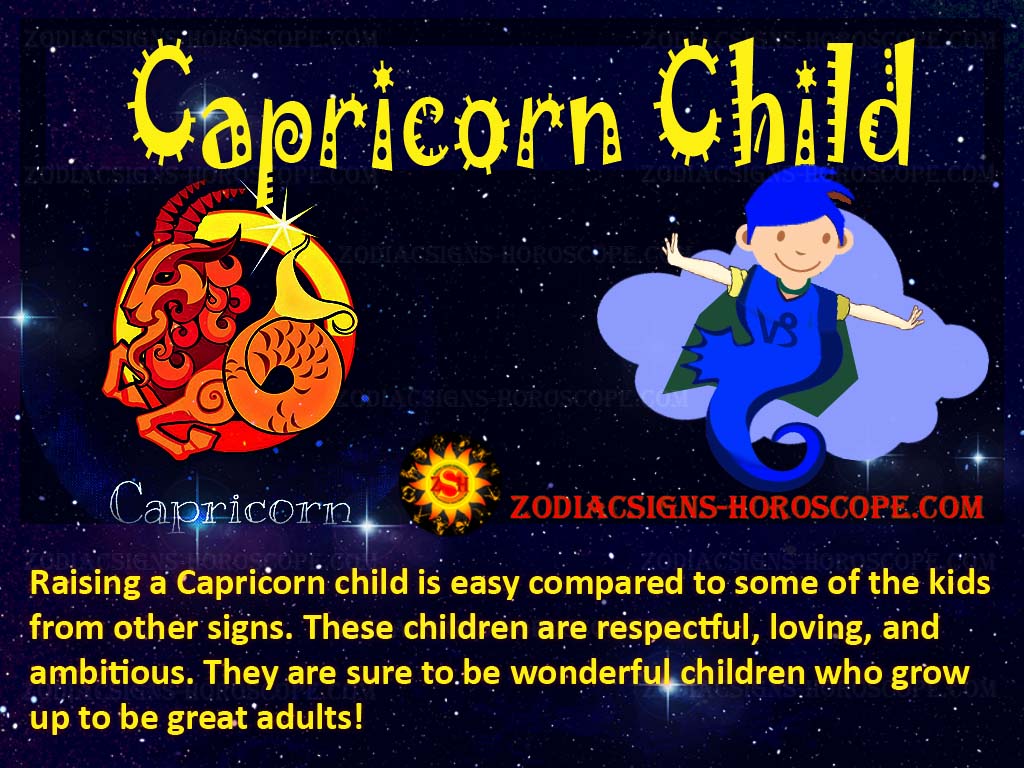 Capricorn as a Child: Capricorn Boy and Girl Characteristics

Capricorn Child (December 22 – January 19) – “Slow and steady wins the race,” is the life motto of a Capricorn person, and the same stands true even for children of this sign. They work at their own pace, do their own thing, and only make friends with a specific set of people. A Capricorn kid truly lives by their own rules, which makes them so special.

The Capricorn child loves to do things that keep their mind as active as possible. They love to build puzzles and play logic games. The kids are often a fan of watching educational children’s programming when they are young and documentaries when they are older.

These kids are ambitious children who love a bit of competition now and again, but these children are not likely to look for any physical competition to get involved with. The Capricorn children are much more likely to join academic competitions than sport’s contests. They set out to succeed, and they work hard to complete their goals, no matter what they are interested in.

When they do make friends, friends are likely to be quiet and serious, just like they are. They will need to be friends with someone who they respect and who respects them back. This is a highly important quality for Capricorn minor’s friendships, even at a young age.

Capricorn toddlers usually excel in their school life. They don’t like to fail, so seeing an F on their paper is something that they will do their best to avoid. They will work hard to maintain good grades.

These kids are also sticklers for the rules, so it is unlikely that they will get in trouble at school by cheating or getting into fights. They are much more likely to be teacher’s pets than anything else. Studying is important to them, but they still know how to have fun on the playground as well.

Like any child, a Capricorn child will be dependent on their parent at the start of his or her life. Eventually, they will start to grow up, and they will want to do things for themselves. They tend to mature faster than children of other signs, which helps to become independent at a younger age than many children.

These kids will still love and respect their parents, though. They know that they can always look towards their parents when they need help with something. The Capricorn children are always learning and will be dependent on someone until they learn how not to be. This takes different amounts of time, depending on the topic and the Capricorn baby in question.

Differences Between Capricorn Girls and Boys

Capricorn boys and Capricorn girls of the same sign have more in common than not. They both need rules to provide structure in their lives, encouragement to make friends and try new things, and some slack when they get stressed out. These kids can sometimes be perfectionists, and they need to know that it’s okay when they aren’t perfect. Girls may have body confidence issues when they get older because of this.

They may worry that they are not skinny or pretty enough. Boys may worry if they do not grow facial hair or if they cannot gain muscles as quickly as their friends. They are both ambitious. The girls will likely want to spend more time with their mothers, while the boys will spend more time with their fathers to learn from them. Other than these things, these genders are the same unless strict gender roles are pushed on them.

The leadership aspect would be seen in this parent-child relationship right from the beginning.

Both the Capricorn baby and Taurus parent are practical.

The Gemini parent would express a care-free approach to the grounded Capricorn toddler.

Regarding security within this relationship, Cancer parent and Capricorn baby would share numerous similarities.

The Capricorn kid would find the Leo parent’s sense of excitement to be too much to handle.

The Virgo parents would be happy with the sense of responsibility from the Capricorn baby.

Since the Capricorn kid was born a planner, the Libra parent would work hard to accept their changes around the house.

The Capricorn child would be glad that the Scorpio parent is intuitive enough to understand their demands both emotionally and physically.

The Sagittarius mother or father would have to adjust to the serious nature of the Capricorn child.

Both parents and children were born planners. Therefore, it won’t be surprising if you tend to plan some playtime with your child.

The Aquarius parent would differ in most ways with the Capricorn baby.

The Pisces parent instinctive nature would help a lot in showering the Capricorn baby with love and care.

Raising a Capricorn child is easy compared to some of the kids from other signs. These children are respectful, loving, and ambitious. They are sure to be wonderful children who grow up to be great adults!