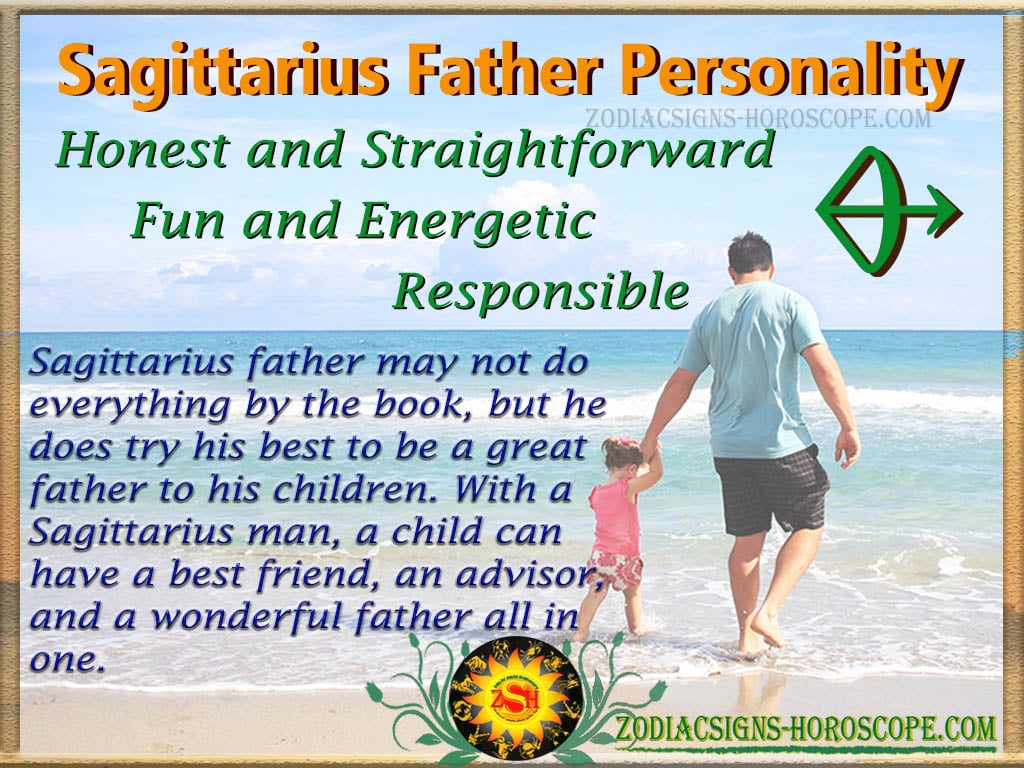 Most Sagittarius men are just out for a good time, but they become much more responsible once they are fathers. They can be serious when they need to be, but they tend to be a lot of fun most of the time. They love to play with their kids and be there for them no matter what. A Sagittarius father is definitely fun.

Sagittarius men are not always the most responsible when it comes to…anything, really, but all that changes once he becomes a father. He is willing to put his partying ways behind him to focus entirely on his family.

The Sagittarius father is the type of guy who will read parenting books and do everything else that he can to be the best dad that he can be. He will show up to all of his kid’s events and he will be there to help them in their bad times as well.

The Sagittarius man was a partier before he was a father, but he never lost his energetic and playful nature. Now he just has something else to do with it! The Sagittarius man loves to play with his kids and he has all of the energy that he needs to keep up with them.

The Sagittarius father loves to play outside with his kids, as sports are some of his favorite things to do. He is also fond of playing video games or making up games with his children. There is never a dull moment when a kid has a Sagittarius father.

Sagittarius men know that being honest is important no matter who he is talking to. He will always make sure, to be honest with his children. He doesn’t feel like it is necessary to ever lie to his children.

The Sagittarius dad would much rather talk to his children like they are adults that can understand everything he is talking about instead of talking down to his children.

The Sagittarius father is always straightforward in this way, as he feels it is the best way to get their message across. He wants his children to grow up to be as honest as he is, and he feels that he can teach his children to do this best by leading by example.

They like to hear both sides of the story if their child fights with someone else, and they will try to understand where their child is coming from. They are not one to yell at their child or hit them but instead talk through problems when something bad happens.

The Sagittarius father wants his children to grow up to be good people, so he is going to try his best to lead by example in all areas of their lives. He wants to act as a guide for his children. He also feels like his children should have a certain amount of independence in their lives.

The Sagittarius father knows how to get the Aries child involved and how to inspire him or her to great things.

The fun-loving and optimistic father would like to relay the same to the serious Taurus child.

These two are always busy and never quiet hence they get along wonderfully.

The Sagittarius father advises the Cancer child on what life is and what it entails while he or she is still young.

These two get along but when they get into a disagreement the father yields first then the child follows. At the end of it, all their friendship is restored.

The Sagittarius father is inventive and his ideas intrigue the Virgo child.

These two both lift each other up by being delighted in the ideas that each of them holds.

The Sagittarius father treats the Scorpio child as his best friend as they share a lot in common.

Both the father and the child have numerous hobbies that they enjoy involving themselves in together.

Both these two are sporty and love athletics.

The friendly Sagittarius father loves communicating with the Pisces child.

The Sagittarius father may not do everything by the book, but he does try his best to be a great father to his children. With a Sagittarius man, a child can have a best friend, an advisor, and a wonderful father all in one.