Libra father likes to keep just about everything in his life in balance, but he is not afraid of showing his kids more than the average amount of love. The Libra men are likely to be their child’s first best friend as well as someone to provide wisdom and guidance as their child gets older. They are caring for men and wonderful fathers.

The Libra fathers also have all of the energy to keep up with their children most of the time. These men don’t mind playing outside or playing board games with their children. This can also help to give mom some time to herself every now and again.

Libra men are very social, and they learn how to become great communicators as time goes on. By the time that they are fathers, they know how to talk to just about everyone, including their little children. They make sure to talk to their children like they are real people, not just little kids.

They make sure to take into consideration everything that their child says, no matter how trivial it would seem to someone else. The Libra father is a higher understanding man, so he is sure to listen to his child’s problems and help them out in any way that he can.

Fair but not Stern

Even the best kids get themselves into trouble sometimes, and this is something that the Libra father has come to accept. When his child gets in trouble, he is not likely to yell at them or punish them right away. He will want to talk to his child first so that he can fully understand the situation.

Once the Libra father knows what is going on, he will likely take some time to come up with a punishment that is fair, or even a little lax. Libra men do not like punishing their children, so they are not likely to do anything too crazy. They are fair men, and they like to stay that way, especially when it comes to their children.

When it comes to parenting, the Libra man takes on a sort of laissez-faire type of approach. Of course, he’s not one to let his children run wild, but he does like to give them more freedom than many parents of other signs would be uncomfortable with.

The Libra father feels as though his children should know that they can express themselves in whatever way they want to. He will support all of their decisions, even if he isn’t entirely comfortable with the idea himself. He feels like freedom is an essential thing for even children to have, at least on some level.

Balance is the Key

Libra men tend to lead a very balanced lifestyle, and they are likely to teach their children to do the same thing, either on purpose or accidentally.

The Libra father is likely to lead by example when it comes to this part of his personality. Since he also wants his children to be free to be themselves, he won’t try to force balance on them, but he will highly recommend it.

The Libra dad is calm and happy and most of all considerate towards the Aries child.

The Taurus child is full of bad moods, but the Libra dad is full of optimism and tries to get the best out of his child.

The Libra father and Gemini child understand each other perfectly hence their awesome relationship.

The Libra father helps the Cancer child look at life constructively and not negatively.

The fathers put family first hence the abundant love and care for the Leo child.

The Libra father spends his money to please his Virgo child positively.

The Libra child is inquisitive, and the Libra dad is ready to discuss any new ideas he or she has.

The Libra father is caring hence treats the Scorpio child as an equal.

There is no greater friendship than that of the Libra father and his child due to the awesome chemistry they have.

These two are both loving, caring, and happy.

These two rarely have problems because they hide their feelings too much but they know how to solve the problems together.

The Libra dad loves his child too much to allow anything bad to happen to him or her.

Libra fathers do their best to keep even their parenting style as balanced as possible. The Libra father may not be the perfect father, but he sleeps well at night, knowing that he has done everything he can to make his children happy. Perfection isn’t real, but having a great Libra father is a wonderful reality for many lucky children. 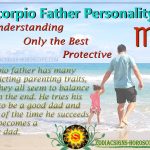