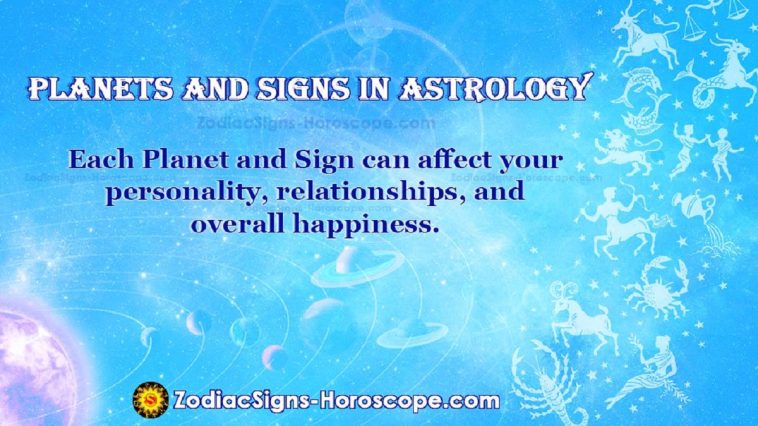 Planets and Signs in Astrology

Are you curious about the effects of planets and signs in astrology?

Wondering how they can impact your life? This blog is for you! Here I will explore the ways that each planet and sign can affect your personality, relationships, and overall happiness. So come along for a fun-filled exploration of the skies above!

The planets in astrology

The planets are the basic building blocks of astrology. Each planet has a unique energy and influence, and when combined with the other planets, creates a complex picture of your personality and potential.

The planets move through the zodiac signs at different rates. The slowest moving planet is Pluto, which takes 248 years to complete one cycle through all 12 signs. The fastest-moving planet is Mercury, which completes one cycle in just 88 days.

The position of the planets in your birth chart reveals a lot about your character and destiny. To find out more about what the planets mean in astrology, click on each one below:

The signs in astrology

There are 12 signs in astrology, each represented by a different planet. The planets in astrology represent different areas of life and personality. Each planet is associated with a different sign, and each sign has its own unique set of characteristics.

The sun is the most important planet in astrology. It represents who you are at your core, your true self. The sun sign is the foundation of your personality and it determines how you interact with the world.

The moon is the second most important planet in astrology. It represents your emotions, your intuition, and your innermost feelings. The moon sign reveals how you react to stress and how you handle relationships.

Mercury is the third most important planet in astrology. It represents your communication style, your thinking process, and your ability to learn new things. Mercury also governs transportation, travel, and commerce.

Venus is the fourth most important planet in astrology. It represents love, beauty, art, pleasure, and luxury. Venus also governs money matters, such as finances and possessions.

The planets and the signs

There are 12 signs in astrology, and each sign has its own ruling planet. The planets represent different areas of life, so when you look at your chart, you can see which planets are strong or weak in your life.

The Sun: The sun represents who you are at your core. It’s your identity, your ego, and how you express yourself to the world.

The Moon: The moon represents your emotions and subconscious mind. It’s what motivates you and drives your behavior.

Mercury: Mercury represents communication, learning, and thought processes. It’s how you take in information and communicate with others.

Venus: Venus represents love, beauty, and pleasure. It’s what attracts you to other people and what makes you feel good.

Mars: Mars represents energy, assertion, and action. It’s what gives you drive and motivation in life.

The planets in the signs

The planets in the signs are said to rule over specific areas of life, and as such, their placement in a person’s birth chart can offer insight into that individual’s strengths and weaknesses. The 12 zodiacal signs are each associated with a different planet: Aries with Mars, Taurus with Venus, Gemini with Mercury, Cancer with the Moon, Leo with the Sun, Virgo with Mercury, Libra with Venus, Scorpio with Pluto, Sagittarius with Jupiter, Capricorn with Saturn, Aquariuswith Uranus and Pisces with Neptune.

Each planet is also linked to one or more of the four elements: fire (Aries, Leo, Sagittarius), earth (Taurus, Virgo, Capricorn), air (Gemini, Libra, Aquarius) or water (Cancer, Scorpio, Pisces). These associations give additional meaning to the planets’ influence on our lives.

When a planet is placed in a sign that it rules (for example, Mars in Aries or Jupiter in Sagittarius), its energy is considered to be strong and focused. This can be beneficial if the planet is well-aspected (see below), but it can also magnify any negative traits associated with that planet. For instance, an overly aggressive Mars might result in someone who’s always picking fights; whereas a poorly aspected Mars could make someone prone to accidents or rash decisions.

Conversely, when a planet is placed in a sign that it doesn’t rule (such as Saturn in Sagittarius or Neptune in Leo), its energy is said to be weaker and more diffuse. This can make it harder for this planetary influence to manifest itself clearly in a person’s life; however, when it does come through, it can add an unpredictable element to that person’s personality.

The planets and the houses

Most people are familiar with the planets in our solar system, but did you know that each one has a unique astrological meaning? The planets represent different areas of human experience, and by understanding their energies we can gain insights into our own lives.

The signs of the zodiac also play an important role in astrology. Each sign has its own set of characteristics and qualities, which influence how the planetary energies are expressed. For example, someone with a Sun in Aries (a fire sign) is likely to be more assertive and outgoing than someone with a Sun in Pisces (a water sign).

The houses on the birth chart represent different areas of life, such as relationships, work, or home. By understanding the energy of each house, we can get a better sense of where we might need to focus our attention.

The planets and the aspects

Most people are familiar with the basic concepts of astrology, such as the twelve signs of the zodiac. But what about the planets? In astrology, each planet has a unique energy and influence. The planets represent different areas of life, from love and relationships (Venus) to work and ambition (Mars).

The aspects are another important factor in astrology. Aspects are the angles formed between two planets. There are major aspects (such as conjunctions and oppositions) and minor aspects (such as squares and lines). Each aspect has a different meaning, depending on the planets involved.

So what does all this have to do with you? Well, your birth chart is a map of the sky at the moment you were born. It shows which signs were rising on the horizon (your Ascendant or Rising sign), where all the planets were located, and which aspects were in effect. This information can be used to gain insight into your personality, your potential strengths and weaknesses, and even your destiny.

The planets and the transits

Most people are familiar with the planets in our solar system, but did you know that each planet has a unique astrological meaning? The planets represent different areas of life experience, and their placement in your birth chart can give clues about your personality, strengths, and weaknesses.

The transits (or movements) of the planets are also important in astrology. As the planets move through the sky, they form relationships with other planets in your birth chart. These transit relationships can indicate things that are happening in your life at any given time.

The planets and the retrogrades

The planets move through the sky at different speeds; some are fast-moving, like Mercury, while others, like Saturn, move more slowly. In addition to their regular motion through the zodiac, the planets also enter into periodic retrograde motion. This means that they appear to stop moving in their forward motion for a brief period of time before resuming their normal movement.

Retrogrades occur when a planet moves from its usual direct orbit around the sun to an orbit that is slightly offset from the sun’s path. This causes the planet to appear to be moving backward in relation to Earth. Retrograde periods are considered times of review or reflection; during these times we may revisit old issues or relationships that we thought we had resolved.

While retrogrades can be challenging, they also offer us an opportunity to take a step back and reassess our lives. We can use this time to reflect on our progress (or lack thereof) and make any necessary adjustments in order to get back on track.