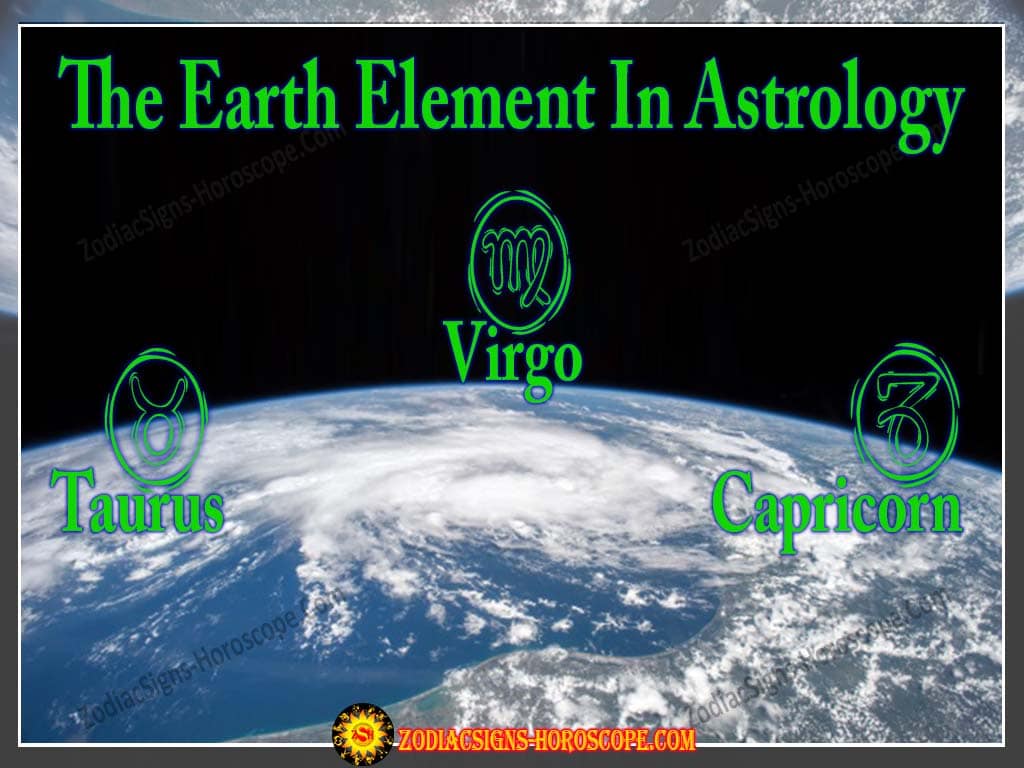 All About the Earth Element in Astrology

What are the 4 elements of nature? In astrology, there are 4 Elements: earth, air, water, and fire. This article will be concerned about the earth element and how it affects the zodiac signs.

Some signs, known as earth signs, are affected by this element more than others. Earth signs have certain traits that set them apart from the rest of the signs. The earth element also has power over three of the astrology houses, which can also affect the signs.

The symbolism of the Earth Element

The earth element in astrology is usually thought of as a masculine element because of its strong and sturdy traits. However, the earth element isn’t fully depicted as masculine, as it also has some feminine traits to it. The earth is not only used to build but also to grow and nurture. It can both represent the man’s strength and power and the fertility and care of the woman.

These signs are practical and like to think of the world around them in a realistic manner. They are the most stable signs of the zodiac. Their friends can be sure that they can always depend on them. All earth signs also work better and feel better when they are outside than inside.

Taurus is a fixed sign within the earth element, which basically means that it matches up with the traits of the earth elements the best out of all of the other earth elements. It is a highly dependable sign. This sign is a hard worker who will not give up easily. They can be materialistic at times, however.

Capricorn is an earth cardinal element sign, which means that it falls between Taurus and Virgo with how well it matches up to earth element characteristics. The sign is practical but not always dependable. These people are likely to love to spend time outdoors, even when the weather is bad. They best fit the description of an ‘earthy’ person more than the other earth signs.

When earth and water signs get together, they work to help each other out. Water signs tend to be more emotional than earth signs. They depend on earth signs to help put them in the right direction. Based on the earth element horoscope, earth signs often have trouble dealing with their emotions, which a water sign can help with.

Earth signs are down to earth, while air signs tend to have their heads in the clouds. When these two are together, they help to balance each other out. The earth sign provides the air sign with something practical and stable, while the air sign helps lift the earth sign’s spirits and spark their imagination.

Fire signs bring excitement into the earth sign’s life. Things can get pretty heated at times, but as long as these signs learn their boundaries, no one will get burnt. The earth sign can provide fire signs with some stable ground and realistic options for them to complete their goals.

Two earth sign people together make up one great team. These signs can build just about anything together. They are great at working hard so that they can have a great future. However, they can sometimes forget that they should enjoy the present instead of always waiting for a great future.

The second house has to deal with money, items, and self-worth. The second sign especially involves how the signs value their own items, spend their own money, and feel about their self-worth. Others think or how a sign thinks about someone else possessions does not matter in the second house.

The signs in the earth element in astrology tend to save a lot of their money, although they do crave the finer things in life. They are likely to treat themselves now and again, but they are frugal most of the time. Other signs may place more value on the things they own and how they feel about themselves when they are in the second house.

The sixth house has to do with physical work and health. This has to do with everything from daily chores to a day job, to whether a person has a cold or not. Earth signs are hard workers. They know that they need to put their full effort into something if they want to get the most out of it.

They are not always so careful with their health, as some of the earth signs tend to be lazy if their work does not require a lot of physical activity. When a sign is in the sixth house, a person may work harder and become more concerned about their health.

The tenth house is all about a person’s reputation among their peers and community. This involves what others think of a sign, not what a sign thinks of itself. A person’s social obligations can affect this.

Earth signs often think highly of themselves and will do what they must to keep their reputations high. Other signs, regardless of their element, are likely to try to raise or maintain their reputation during this time as well.

The earth element is strong and sturdy. It plays a vital part in all of the zodiac signs, whether they are earth signs or not. Hopefully, other signs can learn something from the earth signs.

Stability and practically play their part in life, even if it is not always an exciting part. Being like the earth elements, even when a sign is not in one of the earth-ruled houses, can balance out a person’s life and help them get more tasks completed. According to the earth element meaning, earth signs get more done, but they should also leave room for some fun!