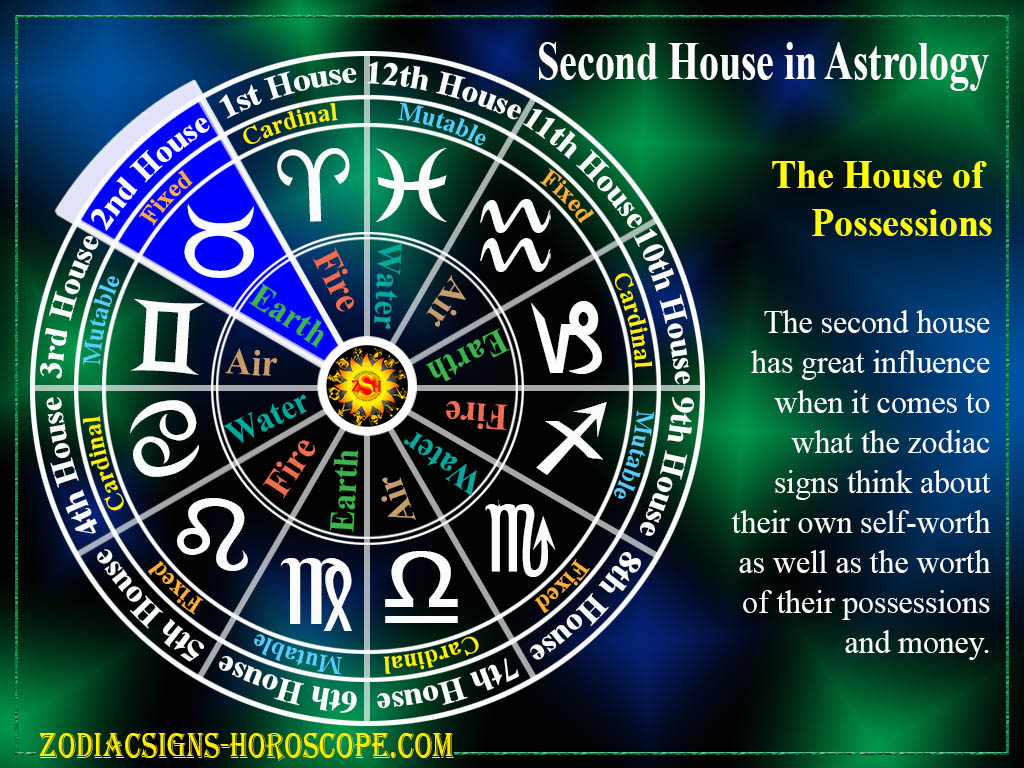 Second House – All about the 2nd House in Astrology

Which is the 2nd house in astrology? According to the second house astrology, the night sky is divided into twelve astrological houses. Each of these twelves houses takes up an equal amount of space, which means that they all have an equal opportunity to influence the signs. Each of the houses impacts the signs differently, making them focus on one symbolic aspect of life.

Meaning of the Second House

When in the second house in astrology, a person is more likely to think about their possessions and money. They may save money to conserve it, or they may buy many new things so that they can gain possessions. People are not likely to share their objects with others during this time.

A person may also put more value on themselves during this time. They will take their talents into account. How they feel about themselves–their self-confidence levels– are likely to improve when they are in the second house astrology.

Planets in the Second House

The sun in the 2nd house in astrology helps people realize what they really value the most in their lives. These can either be material objects or qualities that they have. What is most important will vary from sign to sign and from person to person.

As the sun continues through this house, a person is more likely to focus not only on what they value but on how they can make their objects and themselves more valuable. People are likely to repair old objects and improve their personality traits during this time.

A person’s mood is likely to change as their earnings change during this time. The more money they bring in, the happier that they are likely to be. The 12 zodiac signs are likely to look for advice on what to do about these things while the moon is in the second house.

Mercury in the 2nd house astrology has a focus on material items rather than valuable skills. People will be more likely to use their objects more to get their full value out of them.

They are likely to try to work harder to earn more money to better the objects they already own or to buy new objects. Even though people tend to think more about their objects, they will still think about what they own practically. They are not likely to spoil themselves with frivolous items during this time.

Based on the second house meaning, Venus is the ruling sign for this house. Beautiful items and talents that can help a person earn more money will focus when Venus is in the second house. People will be likely to focus on some of their “prettier” traits, like being artistic or fashionable.

They will also focus more on their beautiful, fanciful objects rather than their practical and dull objects. A person is also likely to try to make money by using their most attractive skills to buy more attractive objects.

Astrology shows that when Mars is in the second house, a person will feel more inclined to express the traits that they value. For example, if a person loves their creative side, they may show off their artwork more at this time than they usually would.

Objects are not much of a concern when Mars is in the first house, but money can be at times. If a person has a lot of money, then they are not likely to be concerned about it, but if they lack cash, then they will likely be focused on finding a way that will help them to make more money.

Jupiter in the second house can be a confusing time for many people. Their new focus on their possessions is likely to complicate other matters of their lives, especially if they are a part of a religion or spirituality that does not condone materialism.

People are likely to try to improve their skills to make more money, especially if they do not currently have much money. If a person does have a lot of money, they may instead re-evaluate themselves to try to figure out which of their traits helps make them the most money.

The astrological houses‘ meaning shows that Uranus in the second house awakens a need within a person to understand themselves better. They are much more likely to focus on the traits that help to make them money rather than the actual actions of making or spending money during this time.

If a person understands what is helping them make money, they will be more likely to show off this trait more. They can either make more money or so that others will realize how much potential they really have.

Neptune in the second house makes people more aware of their personality traits, which help them earn money and the way they spend money. A person is likely to become self-conscious during this time, especially if they have erratic spending habits.

If a person’s self-esteem gets too low because of Neptune’s effect on them, then they will likely have trouble working enough to get all of the money that they need. People who are bad at budgeting are likely to ask for handouts during this time.

As per the meaning of the second house, Pluto in this house puts material items in focus. But it can also show them in a negative light. Frivolous objects are likely to be ignored or hated, but practical items are likely to be used more than ever.

A person is likely to want to have more money, but not to buy fancier items. They will want some extra cash to improve their social life. Sometimes, people will make money quickly, while it will seem almost impossible to come but at other times. Most people will need to deal with both of these effects when Pluto is in the second house.

The second house has a great influence on what the zodiac signs think about their own self-worth and the worth of their possessions and money. This house gives a person the time to reflect on what they have in life and the time to figure out what is really valuable in life.