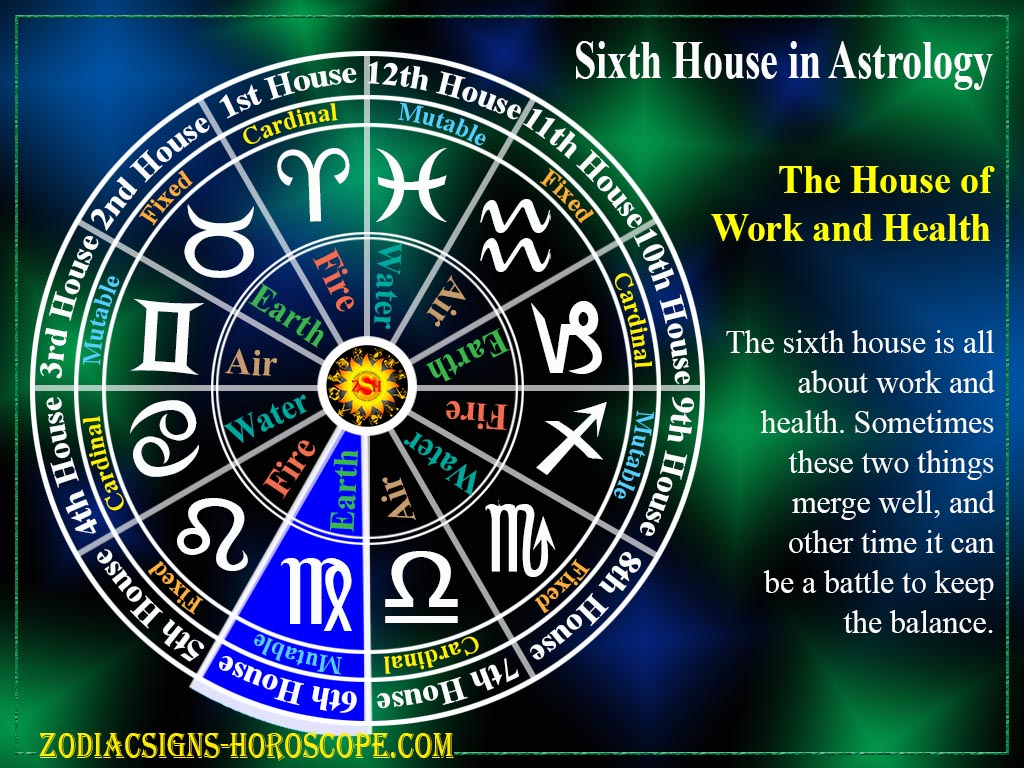 Sixth House – All about the 6th House in Astrology

There are twelve different astrological houses in astrology, and each one has its own unique meaning, symbolism, and effect on the twelve zodiac signs and a person’s horoscope. Each house’s focus remains the same always, but it can sometimes be focused on even narrower when a different planet is in the house. These things can affect each of the zodiac signs, making it important to know all about the sixth astrological house.

Meaning of the Sixth House

The Sixth House is the house of work. All work, everything from small chores that children do to a full-time job that doctors and lawyers must deal with, and everything in between, all count as work as far as the sixth house is concerned. Not only does the work that a person does count as being important in the sixth house, but the time spent on the work and the quality of the finished product or task also carries some meaning.

Everyone needs to work. Even things as small as a person bathing themselves or a parent making lunch for their children count as work. It is important to know that the tenth house also deals with work, but that it is mostly focused on career work and not mundane work like chores. Career work is still a part of the sixth house, but it may not seem as important as volunteer work or chores.

The quality of work done is one of the most important aspects of this house. The better the work is done, the more likely it is to mean something to the person who did it. Rushed work is likely to have less of an impact than well thought out work, and the sixth house makes sure to take all the aspects of work into account as it affects the signs.

Planets in the Sixth House

The moon in the sixth house has to do with how a person feels about the work that they get done in a day. People are more likely to want to work on their personal goals instead of hanging out with friends or working on hobbies that won’t make them money. Relationships, romantic or otherwise, are not a focus during this time; many people will instead see them as a distraction. The harder someone works towards their goals, the happier that they will be.

Mercury is the ruling planet of the sixth house. People are likely to work more during this time, but not to fulfill any personal goals, to earn more money. A person is likely to value their work more during this time, making them value their health less. People will need more help watching over their health to make sure that they don’t overwork themselves when Mercury is in the sixth house.

When Venus is in the sixth house, a person is likely to work on their love life. This is a time for evaluating relationships to see if they are worth something or not. If a person’s relationship can be worked on easily, the person in question is likely to feel happy. If a person realizes that they need to put in more work than expected, or if their romantic relationship is no longer worth working on, they are likely to become upset.

Mars in the sixth house encourages people to improve their skills to get their work done faster and more efficiently in the future. The more a person improves this part of their life, the happier they are. The happier they are, the better their mental health will be, and they will be less likely to get in an accident while working.

Work and health are intertwining ideas when Jupiter is in the sixth house. A person will try to balance out their work and health. They will work as much as they need to get a task done and make enough money to get by. However, they will also try to give their minds and bodies some time to rest to be healthy, both physically and mentally. Perfectionists will have the hardest time keeping these things in balance.

Saturn in the sixth house brings tests to the signs. Tasks may become harder, making a person need to change the way they work. If a person can overcome the challenges they face, then their work and mood are likely to be better in the future. If they cannot overcome the challenge, then their work and health may suffer. This is a trying time, but it can also be worthwhile.

When Uranus is in the sixth house, a person is likely to bore any work routines that they may already set up. People will likely desire to have more freedom in their work lives. They may want to try new things or try to delegate their work to others. While they are less interested in work, people may tend to take more interest in their health. Improving their health through diet, exercise, or medication will likely be a person’s main concern during this time.

Neptune in the sixth house is all about a sign-making something of themselves. They will be constantly be working to improve both the way they work and their general personality at the same time. A person will work harder when they get something more than a paycheck out of their work. A person’s health will also be one of their main concerns during this time. Depending on how happy they are with their job, they may be more concerned about their health than their work.

Pluto in the sixth house will motivate people to work towards their goals, more than their careers. People are likely to be more inspired to do the things that they love during this time. The further that people get on their goals, the happier they are likely to be. A person could also become more obsessive about their health during this time. They may begin to work out and diet more than ever before. This should monitor to make sure that a person does not over-exert themselves.

The sixth house is all about work and health. Sometimes these two things merge well, and other times it can be a battle to keep the balance. The planets can help to keep them in line but in the end. It is up to a person whether they are influenced or controlled by a house and the planets.