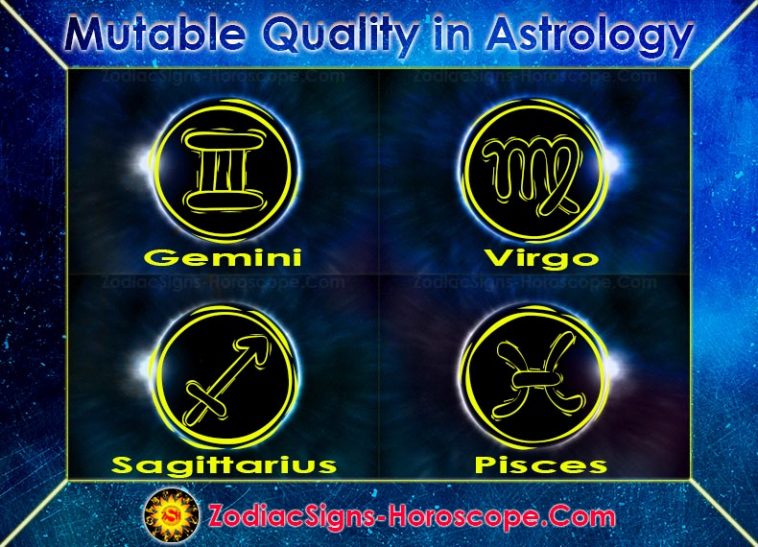 What are mutable signs in astrology?

Astrology has more components to it than almost anyone can imagine. It is a mix of science and astronomy. One of the things that affect a person’s horoscope and astrology, in general, are the three astrological qualities. The three qualities are fixed, cardinal, and mutable. These qualities affect all twelve of the zodiac signs, although they affect four of these mutable signs more than the others.

The four signs that they have the most control over are named after the quality. The three qualities also have some power over the twelve astrological houses. They are also affected by all four of the astrological elements in some way. Out of all of these qualities, the mutable quality is the most changeable, making some interesting effects on the signs and astrology as a whole.

What does mutable mean in astrology? The mutable quality is named from the Latin word “mutabilis,” which roughly translates to the English word “change.” They are the most changing of the three qualities, never fully relating to the quality or element that they come from.

Mutable signs are likely to stray from their zodiac and elementary qualities more than the signs from other qualities would. This is part of why mutable signs sometimes feel as though they do not align with their sign.

Their ever-changing traits can help to make these mutable signs into more interesting and well-rounded people than some of the other signs. One of their best traits, the one trait that sticks with this sign, is their ability to finish something they begin. Many signs find this difficult, but this is the easiest part of a mutable sign or mutable sign.

Each quality controls four zodiac signs. These signs are named for the quality that rules over them. What zodiac signs are mutable? The four mutable signs are Gemini, Virgo, Sagittarius, and Pisces. These four signs are likely to have ever-changing traits and have the common ability to finish what they begin. All of these signs show off their mutable traits in different ways.

Gemini is always changing in one way: emotionally. These people are known for having many mood swings. One minute they are on top of the world and ready to do everything, and the next, they are stuck in a rut, not wanting to do anything.

According to the mutable signs astrology, in good moods, this sign is ambitious and ready to begin something new, but the rest of the time, they would rather stay focused on the tasks at hand.

Virgo is a level-headed sign that likes to keep things practical. The most changing thing about this sign is that they change their goals to fit their priorities.

As per the mutable signs, Virgo people are often focused on their job, starting a family, or juggling both. This sign is a hard worker. Hardly anything can stop a Virgo person from working on their goals.

Sagittarius is an adventurer among the signs. This sign is always changing something about their lives. Sagittarius people do not like to stay in one place for a very long time. This one habit changes many things about a Sagittarius person’s life.

They get the opportunity to try new things and to meet new people. This mutable sign can finish most of their goals, but they are not likely to have many more goals than some of the other signs.

Pisces is the last mutable sign in astrology and the last zodiac sign as well. Based on the mutable signs meaning, this sign is highly creative and imaginative. These two traits help to make a Pisces person’s life interesting. Two days are never the same in the life of a Pisces person.

The Pisces person has many abstract and artistic goals which they are likely to think of, which is odd for a mutable sign, but they can also finish their goals in their life as well.

How the Astrological Elements Affect the Mutable Signs

Gemini is an air sign. It picks up things easily and can use what they learn in their lives. This helps them to become more intelligent every day. The Gemini person’s new skills and knowledge helped shape their goals and complete their goals. Changing what they know often helps to change what they do.

Virgo is an earth sign, which helps to keep it stable and as practical as it is. Earth signs are independent in their own lives, but they love to help others. Having this one earth trait helps to shape the Virgo person’s goals. They change their goals not based on their own needs but based on the people they care about.

Sagittarius is a fire sign. Fire signs are full of energy, and they love to try new things. Sagittarius especially loves to travel. This sign loves to learn like Gemini, but they would rather do it in creative and adventurous ways than reading a book. Their adventurous learning habits are what drives a Sagittarius person to have an ever-changing lifestyle.

Pisces is a water sign. Water signs have a deep connection to their emotions and their subconscious. Having a deeper understanding of themselves and the world around them helps a Pisces person better know what they want to do with their lives. Learning more about themselves can also cause them to change their goals based on what they know.

The third house is all about communication and a person’s environment. During this time, a sign may feel more connected to their surrounding, much like a Pisces person feels most of the time.

However, they may also feel like they need to better their communication skills, making them stray from their usual group of friends or activities.

The sixth house is about working. Everything from making a bed to digging trenches to performing brain surgery counts as work in this house. When in this house, a sign may be more likely to complete their goals, something that mutable signs are usually talented in.

The ninth house relates to nearly all types of learning. When in this house, a sign may take up an interest in something new or learn things in new ways. This is something that Sagittarius and Gemini people commonly do, but it can work for other signs.

The twelfth house concerns itself with the subconscious. Pisces relates to this house more than any of the other mutable signs. When in this house, the other signs are likely to feel as though they understand themselves better, and they may crave to understand more about the world around them as well.

All in all, the mutable sign’s quality has important effects on many different things in astrology. It can be complicated to understand at times, which could be due to its ever-changing nature. What isn’t complicated or changing is how much astrologers value this mysterious quality. 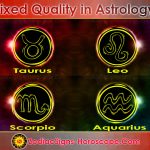 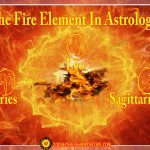