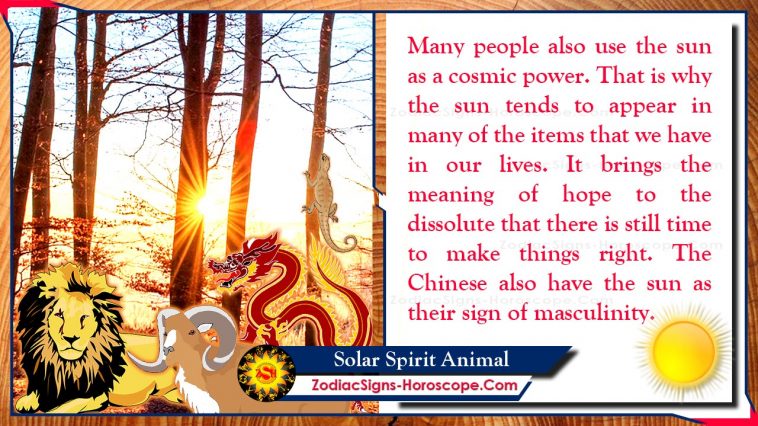 All About Solar Animal Symbolism

In the case of solar animal symbolism, the people under the totemic animals here are drawn to the sunlight’s elements. The animals under this symbol are quite many. Therefore, they harness the sun’s energy then portray it to the people as their spirit animal. The animals under the solar symbol are solar animals. This is because the sun is the provider of illumination and warmth. The solar animal totems offer people the inspiration to start their lives and go after their goals. Moreover, they can also provide one the ideal sense of self-realization. This may be into one’s personality, attitude, attributes, and even abilities.

Definition of the Solar Animal

The term solar is one that refers to the relation of the sun. In this case, it bears the meaning of the animal that is operational during the daylight. They can, therefore, have the energy of the sun manifesting through their lives. Consequently, they can then disperse the same power to the people that belong under their totem.

Meaning of the Solar Animal Symbolism

Many people also use the sun as a cosmic power. That is why the sun tends to appear in many of the items we have in our lives. It brings the meaning of hope to the dissolute that there is still time to make things right. Moreover, the Chinese also have the sun as their sign of masculinity. Also, the Chinese use the symbol of the sun as a sign of a cosmic eye. They believe that there is a being that is watching the world through the sun.

On the other hand, the sun is the symbol of intelligence or one impeccable mind in alchemy. They also look upon the sun as a sign of gold and material of alchemy. The solar symbolism bears totemic news, just like most of the other symbols. The story it carries offers teachings that are significant to the people of the celestial animal totem.

Moreover, the lesson is there to guide one in their life purpose. They also bear the principle of self-growth. This symbol carries so many animals under it as most animals tend to gravitate toward sunlight. Some of these animals include roosters, ‘dragons,’ rams, lions, and cattle.

The animals that roam the world during the day are solar animals. Thus, they bear the symbol of being diurnal. The sun offers them the energy to help push through life through its many traits. They then manifest the power and display it to the people of their spirit animal that, in turn, use it to better themselves in life. Moreover, to look at the solar animal symbolism, one has to look at the traits of the animals that belong under this symbol.

The Lion and its Totemic Meaning

The lion is one of the symbols of the solar animal symbolism. Moreover, the lion is also an emblem in many cultures. It stands as the symbol of strength, power, wisdom, loyalty, and protection, among many others. They are also persistent but also have an immense sense of compassion in them. These are some of the few qualities that the lion borrows from the sun.

Moreover, the lion also has the attribute of being a brave boss. Humans can also influence the lion’s softer side. Furthermore, the alchemist uses the symbol of the lion to represent the sun mainly due to its mane that brings out the flares of the sun in them.

The Dragon and its Totemic Meaning

The dragon has been in the Chinese culture for so long. They believe that the dragons are a creature of the fire and the sun. This is because; their folklore says that some of the dragons could spitfire. Moreover, the dragons have symbols of protection, agility, motion, vigor, and strength. They are the animals that represent the need for authority. However, they also have the soft side of admiration, respect, warmth, ancestry, and good luck in general.

The Ram and its Symbolic Meaning

Like most of the animal totems, the ram has significance under the solar animal symbolism. They bear a powerful connection to the realm of spiritual thinking. Some say that the ram is the representative of gods like Apollo, Zeus, Baal, Indra, and Ea. They signify the need for potency, masculinity, enthusiasm, and hot-headedness. However, the ram is also a symbol of a more simple light of creativity and calculation.

The Salamander and it Totemic Meaning

This animal can represent the cold-blooded animals that rely on sunlight to survive. One will always find the salamander out of the water during the day basking in the sun. It has a keen sense of intelligence, drive, and self-preservation. It is also one of the powerful alchemy symbols due to its ability to regenerate. Some tales tell of the salamander being cold enough never to be bothered by an active volcano. It says that the salamander can manage to sleep through an eruption. Also, some people believe that the salamanders are the cause of active volcanoes due to their searing hot tongues.

The solar animal symbolism has so many animals within it. The animals have another attribute, but they share the symbolism of the solar spirit animal. This means that they can come out during the day and absorb the energy of the solar symbolism. Moreover, the animal takes in the power of the cosmic symbolism the passes it to the people of their totems.

Consequently, the people of these spirit animals then use the energy to gain direction in their life. Or, they can use the messages to help them predict their futures to avoid unpleasantness. They can also use the signals to gain insight into the present lives.