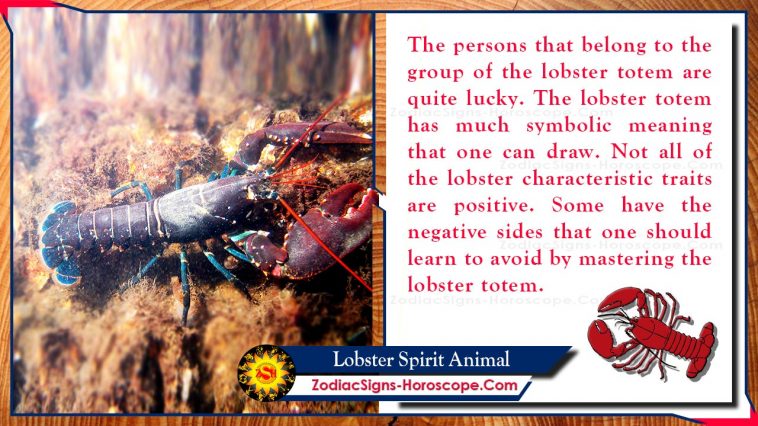 The lobster spirit animal is one of the sea animal totems. Like many other totems, it is also used to guide people in their day to day life. Also, the lobster can have symbolic predictions of the various varieties of possibilities of the future. Some say that the totems like the lobster are one way for the divine world to offer their guidance to humans. Therefore, if one wants to make the best of this spirit animal, they should learn and pay attention to its symbolic meaning.

The lobster is one of the sea creatures that live at the bottom of the seas. They have the habit of scavenging when they cannot be able to capture their food. Also, the lobsters have a hard exoskeleton cover on its body. The hard shell acts or performs the job of protection and is one of the characteristic traits of the lobster.

Meaning of the Lobster Spirit Animal

The Symbolic Meaning of the Lobster Dream

Do you see a Lobster in your dreams?

The lobster spirit animal’s dream is a positive dream. When one has the lobster dream, it symbolizes their ability to show power and tenacity. The people who have the lobster dream are in need to find new ways of defending their visions. Or that they are also capable of holding up during troubling times.

However, some people have the dream of dining on lobsters. Lobsters as a crustacean are one the epitome of delicious meals. People who eat them in real life do so most of the time to show class. Thus, the lobster is a symbol of wealth in real life.

Therefore, when one dreams about munching on lobsters, they are being shown that they have the chance to regain their status. This can also mean that one shall be able to climb the social ladder very soon. Thereby, they need to make adjustments in their lives in preparation for the good times to come.

Some also suggest that when it has the very rare dream of the blue lobster, they need to learn to express themselves. The person needs to correctly learn how to show their emotions to people who are close to them. Therefore, if one was having a hard time telling a lady how they feel, this is a good sign to go ahead and do so. It doesn’t matter if the feelings have reciprocity; you will have done your part. The rest is for the spirit world.

The Significance of the Lobster Spirit Animal

For one to make meaning of the lobster spirit guide, they need to understand its environment as well. In this case, the sea is the lobsters aboard, specifically the seabed. Most people tend to interpret the lobster dwelling as a sign of deep thoughts and sentiment. Thereby the people who belong to the lobster totem group have the chance to wade deep into their emotions to understand themselves better.

The persons belonging to the lobster spirit animal tend to have a lot of trust issues in relationships. They prefer to guard themselves against any emotional weakness. Some believe that they have a hard time expressing their feelings to other people. Moreover, if you try to show them, love, they are most likely not to reciprocate.

This type of behavior leads typically to strains in any relationship. Besides, nobody wants to involve themselves in a relationship that is always chaotic and draining. Being in this situation does not mean that one cannot open up to love if they tried. All one has to do is believe in the teachings of the lobster animal totem and learn how to communicate their emotions appropriately.

The other part of the lobster spirit animal concerning love is showing one how to be simple. They can, therefore, find that they are always avoiding drama. By attaining such wisdom, one can sit back, relax, and enjoy their relationships.

Having the lobster as your spirit animal is excellent and essential. This is because the message demands that one should learn how to express their emotions. They can, therefore, be able to find love and associate freely with other people. Furthermore, the lobster lives at the bottom of the oceans and tend to scavenge for food from time to time.