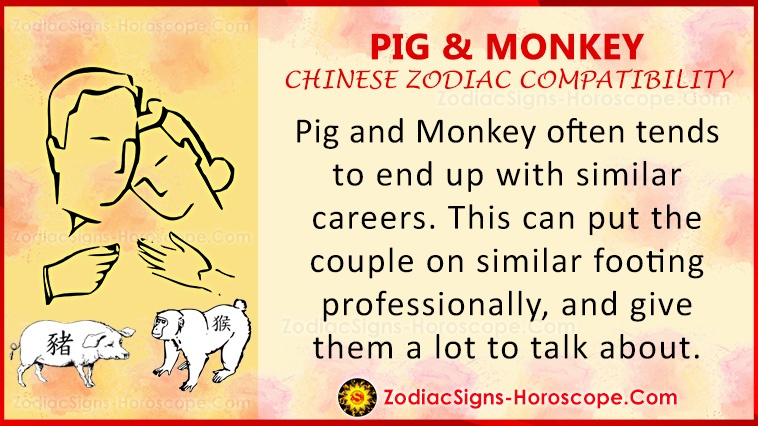 Pigs can be very intelligent, and they tend to do well in school. However, they aren’t the stereotypical smart students that are socially awkward. Also, they are great at Pig with Monkey communication and with others. If your school valedictorian was also King or Queen at the Prom, there’s a good chance they are a Pig. Pigs will aim high and then meet or exceed whatever challenging goals they have set.

Despite knowing how to work hard and excel, Pigs also know how to unwind. They tend to keep jam-packed social calendars because socializing is easy and rewarding for them. Sometimes, because they enjoy social activities, people may mistake them for being lethargic or unwilling to work hard. They tend to enjoy eating and drinking and sometimes can be known to overdo partying or imbibing. This can lead to weight gain and Pig and Monkey relationship issues.

While Pigs are stereotyped as smart but popular, Monkeys are more well known for being pranksters. Like Pigs, they enjoy the company and socialization. They tend to be tricksters, and though their jokes are not usually mean-spirited, they often manage to upset people. Both Pig & Monkey Chinese zodiac signs are brilliant because they learn quickly. However, they tend to be a bit devious and will scheme to get what they want.

Monkeys are known to be hardworking, and a lot of them end up in reasonably academic fields, like accounting, banking, investments brokering, sales, and science. They tend to be multi-talented, but sometimes they use their talents more to cause problems in a Pig and Monkey compatibility than help. Sometimes Monkeys use their skills and abilities in such a way that they may come across as disobedient and not self-disciplined.

Pig & Monkey personalities do not make them the best combination. However, they do have some traits in common. Pigs and Monkeys are both good workers who are intelligent.

Pig-Monkey in love often tends to end up with similar types of careers. This can put the couple on the same footing professionally and give them a lot to talk about. Both will be thinking about their professions and how to get ahead, so that is an excellent basis to start a relationship.

Both Pig and Monkey soulmates enjoy other people a lot, so they would likely enjoy doing things with many people. They are both very active and engaged. If you are looking for someone to have a great time with, a monkey may fit the bill. They will want to go to all of the parties with you and meet all of the people.

Monkeys are not thought to make great partners for Pigs because of certain personality types. This doesn’t mean that a Pig and Monkey relationship between them cannot be a success. However, personality tendencies can make things more complicated than if you choose someone with more in common with you.

While Pigs tend to be foodies, Monkeys often aren’t as concerned with that. Your Monkey may be too busy plotting to want to find the best pizza restaurant in town. This is a negative for many Pigs and can be positive regarding helping the Pig to focus less on things that can lead to overindulgence in their Pig Monkey love compatibility.

Monkeys tend to be scheming to get what they want all of the time. This is just a natural pre-disposition for many Monkeys. This can cause all sorts of stress and strain, especially in a Pig and Monkey relationship. Imagine a link where you are always giving – and the other party is always scheming to get as much as possible. Not all Monkeys are identical, but this is a tendency you often will want to watch for before getting involved with monkeys.

Monkeys also like to play practical jokes in a Pig Monkey compatibility. If you are not a good sport and don’t take being on the receiving end of pranks, you may think twice about dating someone who tends to do a lot of pranks. Even if you are a good sport and can take a joke in stride (even one that doesn’t seem very funny to you), make sure you are comfortable with your prospective partner’s sense of humor. Because pranks intended in good fun may not come across that way to some victims, so if you enter into a long-term partnership with a joker, you may have added stress in the form of upset friends when your significant other gets a bit out of line.

If you are a pig thinking about dating a co-worker who is a monkey, you may wish to think twice. Watch your prospective partner’s behavior at work before considering a Pig and Monkey dating. If he or she is constantly scheming and plotting to get ahead, where you are just working hard and don’t appreciate that type of behavior, that may be a nasty combination for you.

A Monkey is somewhat compatible with a pig concerning enjoying social activities. They often aren’t as good at their Pig and Monkey communication. A lot more work will be needed to maintain a healthy relationship with open lines of communication.

According to the Chinese Zodiac, a person born in the Year of the Monkey may not be the most optimum choice for a relationship with a person born in the Year of the Pig. While Pig and Monkey zodiac signs are both willing to work hard and enjoy socializing, the Monkey’s mischievousness can cause some stress and challenges. While you may experience similar professions and socialize together, you may find yourself trying to apologize for your Monkey’s sense of humor as a more severe Pig.

Your Monkey may not have the same idea about who and when it is appropriate to prank. Also, sometimes they may be willing to use trickery to get what they want when you think that was wrong. Before committing to Pig-Monkey compatibility, make sure you are eager to put in the extra work needed because of the difference in communication skills and make sure that you are comfortable with your prospective partner’s sense of humor. 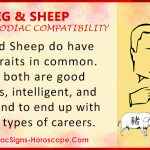 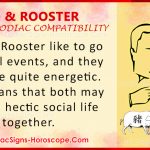