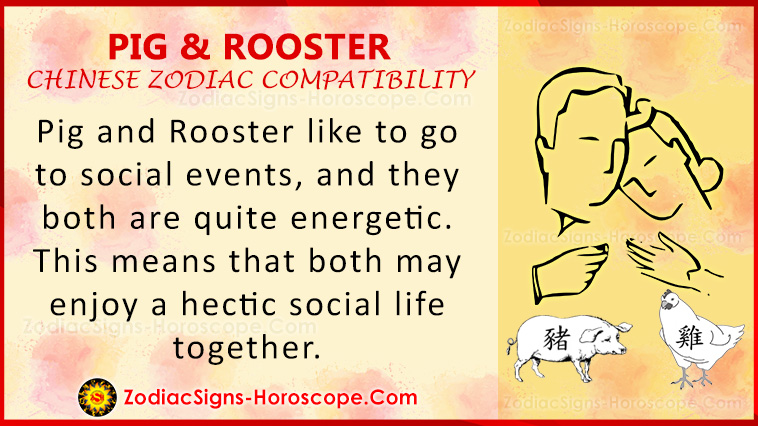 The lunar new year (often referred to in the West as the Chinese New Year) occurs in either January or February, so click here to determine your sign. Pigs and Roosters are about average regarding compatibilities. Some similarities can lead to significant long-term relationships. However, some distinctions between the personalities can cause issues in a Pig and Rooster love compatibility.

Pigs are known for being hardworking and bright even in a Pig-Rooster relationship. In school, Pigs tend to excel and are very popular because they have strong communication skills. Pigs are strong on family values. They tend to be forthright and diligent. Therefore, they will work hard to attain challenging goals and tend to be successful at work. Also, they know how to party and relax, and they love spending time with friends. They often tend to enjoy a good restaurant or a party with good food and spirits.

Like a Pig, often the very things that make you great with people can also cause some life problems. Pigs can tend to the party and eat to excess.  Sometimes other people may perceive pigs to be lackadaisical because Pigs can be so busy keeping up with their social commitments than Pig Rooster commitments and not missing any great parties. As a result, they can lose focus, and they aren’t prioritizing their goals properly.

Roosters, like Pigs, are highly motivated. This means that they like to work hard and often will do well in their Pig Rooster marriage. They tend to be constantly on the go, and they will work hard to ensure their appearance is attractive. They can be very charming. Roosters are often quite vigilant and are likely to notice things. They are often exceedingly daring and self-assured. Often, they will have many talents.

Like Pigs, they enjoy being around people a lot. But, where Pigs are great communicators in a Pig Rooster compatibility that they get along well, sometimes Roosters are more the type to strut around. This is the person who wants to be the life of the party, the person who wants to be the center of attention. Sometimes their desire to get all of the attention can be irritating to others around them, especially those roosters who brag about themselves excessively. They also tend to get annoyed if others don’t listen to them. Roosters are more likely to be tense and temperamental than Pigs.

Pig Rooster soulmates are similar in some areas, which can be a good starting point for a long-term relationship. For example, both Roosters and Pigs are very frank and truthful. That should help some with communications.

Pigs and Roosters both tend to be hardworking and very friendly. That helps regarding having both people interested in socializing, a lot. Pig Rooster in love likes to go to social events, such as parties. Also, they both are quite energetic. This means that both may enjoy a hectic social life together.

Roosters tend to be very talented and put in a lot of effort at work, making them an excellent Pig Rooster compatibility. This is concerning having similar goals in that they both are willing to work hard to succeed. This is particularly true if they don’t work together, as we will discuss below.

While there are some things that Pig Rooster Chinese zodiac signs have in common, there are some differences that can also cause strains in a relationship. Pigs tend to love food and often can eat more than they should. On the other hand, roosters are concerned about appearance and will work hard to make sure they look good. This means that when you, like a Pig, may be exhausted from all of the hard work and partying you have done, the Rooster may be ready to go to the gym and work out.

The Rooster will want to assure that they do what they do with their diet and exercise, and anything else necessary, to look their best. If you, like a Pig, are planning a long-term Pig Rooster relationship, you will want to make sure you are willing to put up with that. Because Pigs can have health problems related to over-indulgence, if you approach your Rooster’s desire to stay in shape with the right attitude, maybe you can join them and avoid some of the health problems that can come from too much food.

Your Rooster will probably enjoy sports. In many cases, Roosters are good at sports. They may be a bit competitive, always wanting to show how talented they are at the many things they do well. Pigs are often not particularly athletic, and many times would prefer not to go swimming, running, or hiking. This can cause some issues in their Pig Rooster love compatibility as they tend to keep themselves very busy. As a result, it can be hard to squeeze everything in.

Also, your Rooster’s constant attempts to try competing with you in a Pig Rooster relationship can be very annoying. Of course, taking part in some athletic activities can be very healthy for you as a Pig, but make sure you understand the competitive aspects of whatever sport is being discussed, and consider encouraging events that are more about teamwork and competition.

Roosters can tend to want to get all of the attention and get upset if they don’t get it. Additionally, they can annoy others, trying to get that attention. Therefore, you may find at social events; if your Rooster isn’t getting enough attention, they may become upset and moody. You may also see other friends getting upset that your Rooster always has to be in the limelight. This is something that can cause issues to your Pig and Rooster social compatibility.

In a Pig Rooster dating, you need to keep in mind that if they always expect to be the center of attention, that can cause stress and strain at the workplace. Understand that and make sure you are ready for that before you try to spend all of your waking time with your significant other. If you are a Pig dating a Rooster, it may be best to maintain separate careers.

Also, keep in mind that just because your prospective Rooster partner enjoys socializing as much as you do. However,  that does not mean that they communicate their thoughts and feelings as quickly as you do. You will want to make sure to be careful to understand each other because your Rooster is a bit more self-absorbed, and therefore it will take a bit more work to have a Pig Rooster communication.

Overall, a person born in the Year of the Rooster will be somewhat compatible with you as a Pig. However, keep in mind that some differences will make both parties have to work harder. If your Rooster enjoys being at the center of things, make sure that it is agreeable to you before committing to a Pig and Rooster relationship. Also, make sure to pick activities that are more teamwork based. As a result, your Rooster isn’t always trying to beat you at something.

Also, when you are socializing, a rooster may infuriate your friends by always wanting attention. Make sure you are ready to handle that in Pig-Rooster compatibility. This is whether by knowing how to distract your Rooster in a Pig Rooster compatibility. Or by making sure you don’t overstay your welcome at parties. 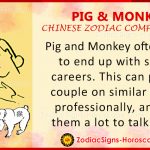