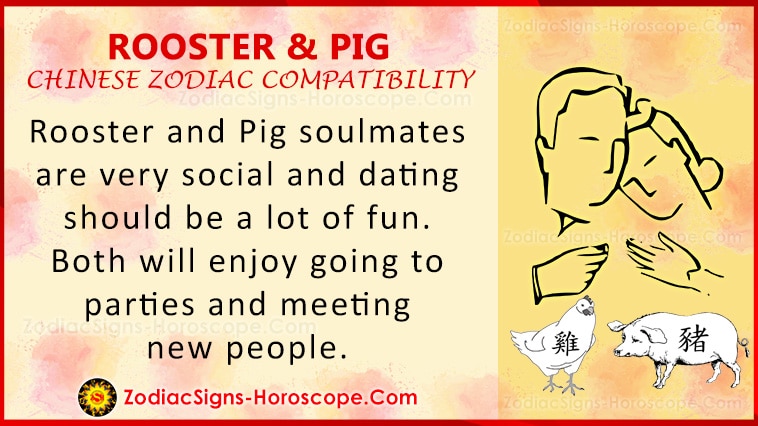 According to Chinese tradition, your zodiac sign has a great influence on your personality. While it is possible for two people with personality traits that aren’t normally considered compatible with a great long-term relationship, the more compatible you are with your partner, the easier it will be to get along. A Rooster and Pig love compatibility is often considered to be average. Some parts of your personality should be highly compatible, but others are not.

Roosters are dedicated workers who put in the effort to do a good job. They are also known for being intelligent and bright. Roosters are very social and enjoy being the center of attention. They usually are known for really being attentive and vigilant and are great leaders. They are also known for being brave and daring. Many Roosters are talented at multiple things. Roosters are self-assured and willing to take on risks and try new things. They are very successful busy people, even in a Rooster Pig relationship. They are usually athletic and very competitive (although they compete mainly with themselves, always trying to do a bit better than before).

Roosters have some areas where they are weak, as well. Roosters sometimes are so busy that they don’t take care of themselves as much as they should. While they make sure to exercise and often try to eat healthily (so they look their best), they may not get enough rest. They may also tend to injure themselves by taking part in risky activities or simply not stretching enough or pushing too hard. Because they are assured, they sometimes can come across to other people as being vain. Roosters may annoy people by being a bit too self-centered on occasions, including on a Rooster-Pig date.

Pigs, like Roosters, are usually known for being industrious and meticulous. Like Roosters, they enjoy spending time with other people and are comfortable meeting people. Pigs and Roosters both tend to have excellent communication skills. Pigs are very family-oriented and value friendships greatly. While Pigs work hard, they know how to relax and have a good time. They are known for being honest and faithful, which is a good thing for a Rooster Pig marriage. Sometimes, Pigs can overindulge a bit because many of them like parties, good food, and good drink. Unlike Roosters, Pigs are not normally known for being athletic or competitive.

Rooster Pig soulmates share some likenesses. These are things that can make the relationship between Roosters and Pigs flourish. Roosters and Pigs are both known for being very honest and true and dedicated to their families. This means that they will be willing to work hard for a successful relationship once they have committed. Additionally, because both partners are very forthright, that will enable them to trust each other. They also are both good at communicating. These things are a great starting place for a good relationship.

Both Roosters and Pigs are hard workers who tend to succeed at work. This can put them in a great place financially, which is really helpful since financial issues can add a lot of stress to a Rooster Pig relationship.

Roosters and Pigs are also both very social, which means that Rooster Pig dating should be a lot of fun. You both will enjoy going to parties and meeting new people. Whether you are hanging out with a few friends or going to a party, you both will enjoy socializing together.

You can also have great Rooster & Pig communication, although your communication styles will be a bit different. You will enjoy talking with each other and getting to know each other. Your Pig’s tendency to be a bit less physically active than you are can also be a great thing for you. Because you work so hard and play so hard, you sometimes tend not to stop and smell the roses. Your Pig will naturally help you to be a bit more balanced in those areas.

While Rooster Pig in love can get along in the long term, some differences will create challenges. It is best to know what these issues are so you can both work together to solve them before they grow out of proportion.

In a Rooster and Pig life compatibility, Pigs, like Roosters, love to socialize. Pigs are known to work hard and play hard, and so are Roosters. But playing hard usually means something different for Pigs than for Roosters. Your Pig’s idea of playing hard will mean not missing a social event, checking out all of the great restaurants, and experiencing a lot of good food. For you, playing hard likely means to go out and do powerful things.

You may be seeking to beat your personal best marathon time or trying a more extreme sport. There will be times that you may tend to get frustrated with your Pig and think that he or she is lackadaisical. It is o.k. for you to encourage your Pig to be a bit more active in your Rooster Pig compatibility. But remember to compromise and let your Pig be him or herself. You may also want to consider doing some gentler activities with your Pig, such as yoga or taking nice strolls.

You are likely very competitive in your Rooster with Pig relationship. Remember that your Pig most likely is not. Your Pig is going to be much happier working or playing with you than against you. If you want to get your Pig involved in something athletic, remember that by being competitive, you will probably make it no fun for your Pig.

Even though you and your Pig communicate with others well, you both have a very different style. Most likely, you enjoy talking (and controlling the conversation) more than your Pig does. Make sure to be cautious and make sure you are listening to your Pig. You may have to work a bit harder than you do communicate with others in your Rooster & Pig compatibility because you communicate differently. This will be an area where you both will probably need to put in a little extra effort.

Rooster-Pig soulmates are considered to have average compatibility. As with any relationship, there will be some problems, and you both will need to be dedicated to working through those issues as they come up. While you share a lot of similarities, you also have some differences. Remember that your communication styles are different, and work at listening to your Pig.

Also, make sure that you let your Pig help you be a bit more balanced by doing some gentler activities with you – this will allow your muscles to recuperate while helping your Pig get needed exercise. If you both are willing to commit to compromising and working on communications, you should have a fantastic long-term Rooster & Pig compatibility.