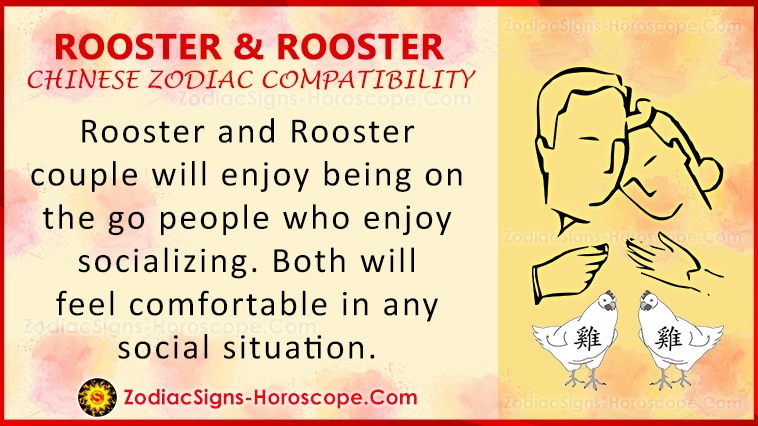 Of course, any two people who fall in love and are dedicated to each other may have a great long-term relationship, regardless of personality types. But some combinations will require more work than others. People may assume that dating someone with a similar personality type will make things easier, but that depends on a lot of the personality in question. Let’s consider the Rooster personality traits to see whether Roosters and Roosters will get along with one another easily in a Rooster and Rooster love compatibility.

The Chinese Zodiac system has twelve signs based on what lunar year a person was born in. If you were born during the Chinese Lunar years of 1933, 1945, 1957, 1969, 1981, 1993, and 2005, you are a Rooster. This is based on the Chinese Lunar Year, so if you aren’t sure of your sign, use this quick and accessible tool. Your sign is said to be predictive of your personality type. Below is more information on Rooster and Rooster compatibility.

Roosters typically are extroverts who enjoy other people. They like socializing and are good at meeting people. Therefore a Rooster and Rooster date will be easy to initiate. They are beautiful, delightful, and talkative. Roosters are concerned with their appearance and will take steps to make sure that they look their best. They usually are very confident and very good at entertaining others. They are also known for being good friends, and they are brilliant and often excel at their work.

Many Roosters are talented in multiple areas, even in their Rooster with Rooster marriage. They are not risking adverse and can be very courageous. Roosters often choose careers where they can use their gifts to lead people, and many may choose occupations that have some degree of risk. They are usually known for honoring their word. Also, they tend to be very active, and while they may work a lot of hours and socialize a lot, they usually manage to find time to work out or to take part in athletic activities. Of course, like anyone, Roosters tend to have some weaknesses as well. For many Roosters, their main flaw is just the other side of the coin for their strength.

Because they tend to be more self-assured than other people, they can come across as being somewhat self-absorbed or arrogant. Some people may even perceive some Roosters to be braggarts. Many Roosters talk about themselves a lot in a Rooster-Rooster relationship, and they also can get upset if they aren’t getting as much attention as they think they should. Because they are often incredibly courageous, they may tend to take part in more dangerous activities and, therefore, be at higher risk of injury than many other personality types. Roosters can sometimes struggle with communications in a serious relationship because they are much better at talking than listening.

Rooster & Rooster in love will tend to have a lot in common. This means that you and your prospective partner should understand each other from the start.

Rooster and Rooster horoscope match will enjoy being on the go people who enjoy socializing. You both will feel comfortable in any social situation. You both likely have been known for being the life of the party. Your initial time spent together at social events should be fun. Your Rooster, like you, will be very charismatic, which is something that will draw you to him or her at the outset.

Also, Rooster Rooster in love will enjoy similar past times, and both will be willing to try new things. As a Rooster, you may have had interests that many of your other friends would not pursue. If you have always wanted someone to do extreme sports with you, your Rooster may be a great choice. You both will understand the value of taking risks and working hard to succeed. In short, a long-term relationship with someone who is a lot like you means that you will have a lot of things in common.

Roosters aren’t considered to be great matches for long-term Rooster Rooster relationships. If you are considering trying the knot with another Rooster, make sure you both understand that sometimes being too much alike can create disputes, and make sure you are dedicated to working past those issues. Understand that you both will be called upon to compromise with each other on occasion.

You will want to get to know your Rooster well and see how they act in social situations and consider how you work in social situations. If you both like being the focus of attention at all times, that will cause some problems for your relationship. Make sure you both are willing to share the limelight in a Rooster Rooster compatibility. If you both need to have attention all the time, you may want to think about whether committing is a good idea.

It is reasonably likely that Rooster Rooster soulmates may be go-getters who work and play extremely hard. This can mean that you overwork yourselves and that you risk injury from sports, etc. Also, make sure that you and your Rooster are dedicated to having a healthy lifestyle. Don’t forget to take time to rest and relax your bodies and minds, and make sure you are doing things like stretching or yoga to help your body recover from your more strenuous or dangerous pursuits.

Additionally, it is relatively likely that Rooster Rooster Chinese zodiac signs are natural-born leaders who are used to being followed. If that is the case, you can assume that both of you will want to lead and make the decisions. Make sure that you and your prospective partner can work out ways to split leadership in the relationship. Make sure that your tendency to lead naturally does not come across to your partner as if you are always trying to control. You will both have work to do in this area of your lives together.

If you, as two Roosters considering a Rooster Rooster marriage, intend to start a business together, you may wish to consider whether or not having two influential people working and playing together all of the time is going to be a good idea before you commit to the venture.

Roosters have influential, brave, confident personalities. Roosters can get along in a long-term Rooster with Rooster relationship. That is if they are both willing to work. It is to be expected that two Roosters may have to work a bit harder than some couples. Make sure that you get to know your prospective partner thoroughly before committing. You will need to work together to compromise with each other. This is especially when you both want to lead or get attention.

Also, remember that you both tend to do too much. Also, it would help if you were careful to pay attention to your mental and physical health. Make sure that you both get the rest that you need. You both should take part in activities that help your body to recover. If you can both agree to do those things, you should have a long and healthy Rooster and Rooster compatibility.