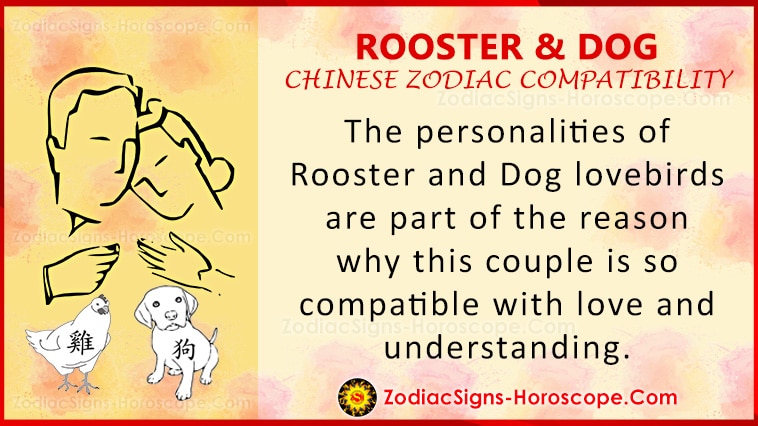 If you are thinking about Rooster and Dog dating, you may wonder whether your personality types would be a good fit. Any two people in love may choose to work through differences, which means people with any sign combination can get along well, but it may require more work. If you are a Rooster and think about committing to a long-term relationship with a Dog, be ready to work through some differences.

Roosters generally are very hard workers, even in a Rooster-Dog relationship. They tend to excel in their chosen professions. Many Roosters are talented at several different things. They usually are known as go-getters who work and play hard. Also, they enjoy socializing, but they also enjoy testing their bodies, and many enjoy sports others would consider dangerous. Equally, they are fearless and courageous. Generally, Roosters are natural leaders who are charming and popular. Roosters generally like to look good and take care of themselves and dress to look their best. They are self-assured and confident. They are not risk-averse at all.

Like any personality type, Roosters have some weaknesses as well as strengths. Sometimes, because Roosters are confident and self-assured, others can think that they are conceited. Also, some Roosters will talk about themselves enough that some people will see them as being braggarts. Because Roosters are constantly working and playing hard, they can overdo things and become overly stressed. Also, because they bold and like to push themselves physically, they can be prone to get injured.

Dogs have some things in common with Roosters. Rooster & Dog Chinese zodiac signs are intelligent, hard workers. Both tend to excel at work and be very popular. Both tend to be better at getting to know someone and communicating on a shallower level than a deep level. There are, however, some differences. While Roosters tend to be leaders, Dogs tend to be followers. Dogs are conservative and generally will not take any risks that they don’t have to take. They do not like to be the center of attention and are generally easy-going. Also,  Dogs usually do not like making decisions.

Often, it is said that Rooster Dog in love isn’t very compatible. However, there are some areas where the differences can be positive. Roosters and dogs both enjoy social functions. Whether you want to hang out with a few friends or go to a big party, you and your Dog zodiac will both enjoy that. While you are probably more comfortable in different social settings than your dog, you both will likely have fun dating. Your Dog most likely will not want to be the center of attention and will be perfectly happy letting you charm his or her friends and co-workers. This is a great starting point for your relationship.

Your Dog will not be nearly as willing to take risks as you are in a Rooster Dog love compatibility. Though you may assume that this is a problem, it actually can be a strength because your Dog may bring some balance into your life. On occasions, you may tend to do things like make excessively risky investments or take part in leisure activities without stopping to think about how dangerous they are.

Your Dog will encourage you to refrain when you are too daring in a Rooster Dog marriage. You can help your Dog consider trying things that he or she would not usually work. This means that you both may help each other be a bit more balanced in your lives. It would be a good idea for you to take part in things like Yoga or strolling through the park so your partner can be more active, and you can allow your muscles a chance to recover.

As a Rooster, there is a good chance that you are used to being in control and making decisions. Often, Dogs are straightforward, going, and don’t like to make the little decisions. This means that for those little decisions, like where to go for dinner or which movie to see, your Dog will probably prefer that you make those choices in your Rooster and Dog relationship. You probably would prefer to make those choices, anyway, so this will work well.

There are some differences between Rooster Dog soulmates that may create challenges for you. These are not insurmountable but may mean that you both have some compromising to do. For example, because you are much more self-confident than your Dog, your Dog may sometimes think you are too worried about being the center of attention and too focused on yourself. This may frustrate your Dog. Make sure that you are aware of your partner’s feelings. Try not to be too grumpy with your Dog if you aren’t getting the due attention.

Your Dog may not particularly enjoy physical activities. Feel free to encourage your Dog to take part in some exercise, but realize that your dog will not be comfortable doing risky activities. Also, understand that your Dog will most likely not want to compete with you. Be willing to compromise in scheduling your exercises and what you both are eager to do together in a Rooster and Dog compatibility.

Your Dog is much more risk-averse than you are. Make sure that your Dog zodiac is comfortable with those activities you are not willing to stop doing. For example, if you are a police officer on a dangerous beat or a commander of an infantry unit that is likely to see action, or a race car driver, your significant other may not be cut out to handle that. Ensure you know what you both are willing and able to process before committing to a Rooster with Dog marriage.

While Rooster and Dog soulmates are both very friendly and intelligent, some personality differences will be relevant to your relationship. One of the areas where this is likely to be the biggest challenge has to do with differences in courage and confidence.

In some ways, this can be positive, but in other ways, this can be a source of stress. Make sure you are willing to be sensitive to your partner’s needs and consider those. If you both dedicate yourselves to making the Rooster and Dog compatibility work, you will be rewarded with a happy and healthy relationship despite the differences. 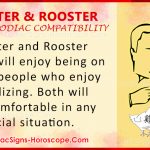 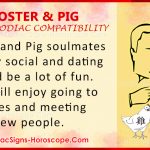