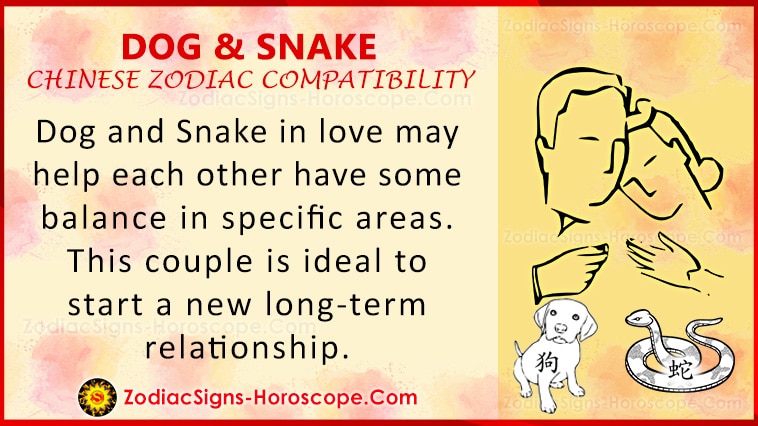 These dates are based on Lunar Years, not standard calendar years, so you will need to verify your sign using this tool. Of course, regardless of your Zodiac sign, any two people can make a relationship work if they both are willing to work hard enough. But, if you are compatible, less work is needed. Dog and Snake in love are, in many ways, opposites. But do those differences help or hurt long-term relationships?

As a Dog, you are good with people, and you value good relationships, even your Dog and Snake relationship. Dogs are hard workers who are faithful and true. They value family bonds and tend to make great parents. Dogs make great friends who are always glad to help when that’s needed. They are also great team players at work, who are usually willing to jump in and go beyond the call of duty to get things done, even if they know that they aren’t getting the credit. This means that they tend to do well in their careers. Additionally, Dogs are usually rather laid back and willing to go with the flow.

Sometimes Dog’s real strengths can also be weaknesses, including in a Dog and Snake love compatibility. Dogs are willing to let others walk all over them at times and let others take credit. Dogs do not tend to be leaders naturally. Usually, they are much happier, just following. Although Dogs love being around people and communicate well, they tend to struggle more to share their innermost feelings than some other people because they are a bit overly cautious. They can get overworked, and they cannot say no to get the rest they need. Also, in trying to help friends, sometimes they come across as being nosy.

Snakes, like Dogs, do tend to be more intelligent than average. They tend to be a little enigmatic and hard to pin down. Snakes aren’t particularly outgoing and often choose careers and past-times where they don’t have to deal with too many people. Often they are very private and want to keep others at arm’s length. A snake will share deep feelings with friends, but they are very selective, and you will have to earn their trust before they open up to you. Once they make a good friend, Snakes are loyal friends who will value the Dog-Snake friendship. Snakes, like Dogs, are brilliant and enjoy mental challenges. Snakes are great problem solvers who enjoy fixing things.

Dog & Snake zodiac signs are very different. This does not mean that a long-term relationship between a Dog and a Snake can’t be great. It just means that both parties will need to work hard to deal with some of the differences. Some differences will good by helping you (and your partner) balance out your habits and tendencies a bit.

Snakes often are described as enigmatic or mysterious people. They aren’t particularly talkative or open to people they don’t know well. In many ways, as a more outgoing person, a Dog may find this to be attractive. Wooing your Snake may be a bit of a challenge. But there is a good chance you will enjoy trying to understand what makes your Snake tick during a Dog Snake date.

Because Snakes don’t trust just anyone and don’t have many friends, they tend to value those friends they trust. There will be Dog-Snake in their relationship. This means that once you take the time to get to know your Snake, your Snake will tend to be loyal to you because those rare people want to spend time with those special to them.

Dog and Snake in love may help each other have some balance in specific areas. For example, you may tend to socialize more than you should and not allow yourself to have enough quiet time to rest and relax. Your Snake will lean towards not socializing much at all and staying home where it’s quiet.

This is one area where your differences can help your Dog snake compatibility (and your health) if you both agree to compromise a bit. You and your Snake are both brilliant and will have that in common. Similar intelligence levels are helpful when trying to start a new long-term relationship.

As mentioned, in many ways, Snakes are very different than Dogs. While opposites attract, it can be hard to have a successful long-term Dog with a Snake relationship. Especially with someone who doesn’t share similar interests as you do. This doesn’t mean that it is not possible to do it. However, the following are some challenges you will need to be ready to work through.

Snakes are not nearly as social as Dogs in a Dog and Snake love compatibility. This does not mean that if you are dating a Snake, your Snake won’t ever socialize with you and your friends. But it does mean that you and your Snake may need to agree to let each other pursue different interests. Like a Dog, your idea of a great way to spend a Friday night may be to go to a huge party and meet lots of people. Your Snake may think that a wonderful way to spend a free evening is to turn off the phone and work quietly on a project.

Before committing, Dog and Snake soulmates need to understand each other’s personality and be willing to let each other do their own thing on occasion. You may also want to try to find something to do on occasions that you can both enjoy – something that permits your Snake to use their problem-solving skills in a fun manner while allowing you to socialize – perhaps a game night with friends.

Snakes may be difficult for you, as a Dog, to meet. Snakes aren’t very outgoing and try to do their own thing even when in a Dog and Snake compatibility. Dogs tend to hang out with groups of people. This means that the chance of you meeting a Snake in the first place is a lot less than the possibility of you meeting someone with a more outgoing personality type.

Dog & Snake in love tends to make average combinations. Dogs and Snake personality types are very different, and some of those differences will help your relationship thrive. Others may require you both to put a bit more effort into the relationship. As always, before committing to a long-term relationship, be sure to get to know your prospective partner well and make sure you understand their personality.

Once you do that, you can assess the similarities and differences. Then, figure out if you both are willing to do what is necessary to make your Dog and Snake compatibility last. Remember that you are choosing to date someone who is comparatively a loner. Also, someone who doesn’t commit if you are expecting them (or you) to change who they are to make things work entirely. If you do that, you and your Snake can have a significant relationship that lasts a long time. 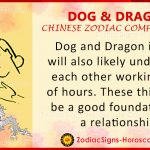