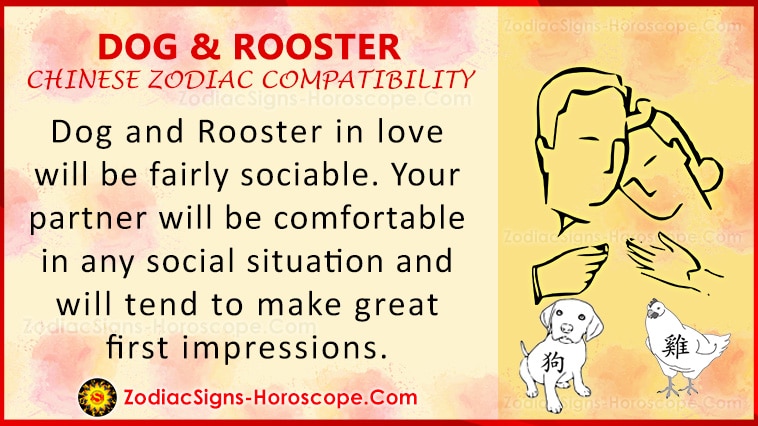 Are you a Dog born during the lunar years of 1935, 1947, 1959, 1971, 1983, 1995, or 2007? Did you ever wonder if a Rooster would be a great romantic partner in a Dog and Rooster Compatibility? If you are thinking about someone born during 1933, 1945, 1957, 1969, 1981, 1993 and 2005, this article is for you! Use this tool to find your sign. Dogs and Roosters have some similarities, but they have a lot of differences as well. Some differences can make relationships easier, but others can make them harder. Of course, any personality type can have a successful relationship if there are personality conflicts, but the more compatible you are, the easier things will be.

As a Dog, you most likely work hard. Dogs are team players who like to help other people out (both at work and in their free time). Dogs are usually straight shooters that honor their promises. Also, Dogs are sociable people, but they usually are fairly balanced about that. Often Dogs like to go along with the flow and don’t like to draw attention or have disputes with others even when in a Dog and Rooster love compatibility. Often, Dogs will set high goals and achieve them. If you are looking for a team player, a Dog would be ideal.

Dogs value family life and make great parents. While Dogs have many strengths, they have weaknesses. They do not always communicate well with others; hence a Dog-Rooster communication will be a problem. Dogs often can be misunderstood because they have problems expressing themselves, especially deeply emotional matters. Additionally, Dogs can be seen as being overbearing and meddlesome sometimes because sometimes they try too hard to help other people. Also, Dogs can be too careful and not take the risks they need to grow to their fullest potential.

Roosters tend to have several good traits and are hard workers who tend to succeed at their Dog and Rooster relationship. They also like socialization and usually are talented in many different things. Seemingly, they are willing to work hard to succeed at all of them. They like to look good, and they are willing to do what they need to make the most of their appearance, like working out and dressing well.

They are confident and willing to take on risks. Roosters tend to be very well-spoken and are not shy even when in a Dog-Rooster dating. They are gregarious extroverts who are always on the go. However, Roosters can have some issues as well. While they are great regarding meeting people, they are not always the best at communicating in a long-term relationship.

Additionally, Roosters tend to be a bit self-centered and want more than their fair share of attention. They work so hard and are talented at more things than most people means that they can be a little conceited. They can get a bit moody and sometimes get upset if others are getting more attention than they do.

Typically Dog and Rooster soulmates are not considered the best companions. However, there are some areas where Dogs and Roosters are complementary to one another. If you are a Dog considering dating a Rooster, you may have a long road ahead of you. But that doesn’t mean that it can’t work, as long as you both understand what you are getting into, and you both are willing to dedicate the time to make your relationship thrive.

Dog with Rooster in love will be fairly friendly. Your partner will be comfortable in nearly any social situation and will tend to make great first impressions. The Rooster will be able to fit in wherever your interests lead you. Your Rooster will be the life of the party and will be comfortable meeting your bosses, your friends, and your family. You (and everyone else) will most likely be drawn to your Rooster when you meet him or her – Roosters are often very charismatic.

Your Rooster will be a lot more willing to take risks than you are. This can be a good thing because there are times when you probably should try something you want to do, but you aren’t sure about taking the risk. Your Rooster will encourage you to try different things and take some risks. This can help bring that aspect of your Dog & Rooster personality a bit more into balance.

Also, let’s face it. There is a good chance that you don’t enjoy making every little decision in life. Often, Dogs would prefer to go along with the flow and not sweat the small stuff of your Dog and Rooster relationship. If you don’t want to be bothered with deciding what you should have for dinner or what movie to go to, your Rooster will gladly make those decisions for you.

If you despise those Dog & Rooster conversations where no one wants to make a decision, you will appreciate this. On the other hand, your Rooster won’t understand why anyone would think this is a good thing, and that’s o.k. If you want to be a team player, having a Rooster be the family leader may not be a bad idea.

Dog & Rooster Chinese zodiac signs have many differences that will lead to some stress in a long-term relationship. Of course, you and your Rooster can work through those problems if you are both willing to do so.

One of the main issues that are likely to come up is that your Rooster will want to strut his or her stuff and be the center of attention. This is something that you may initially find attractive in your Dog and Rooster love compatibility. Rooster is so confident and self-. But, after the relationship goes on for a while, you may find yourself getting frustrated that it all has to be about your Rooster. Your Rooster may get grumpy if they aren’t getting enough attention at a social event.

Your Rooster may also upset other friends by constantly showboating to get attention. Make sure that you understand how much attention your Rooster needs before you commit to a Dog and Rooster relationship, and be ready to try to help smooth over feelings if your Rooster and your friends have some disputes due to your Rooster’s need for attention.

Additionally, your Rooster will constantly want to try new things, some of which may be too dangerous to your eyes. These things can lead to some stress. Make sure you get to know your Rooster and that Dog & Rooster in love are willing to compromise on scheduling issues and what types of activities you are comfortable with.

Dogs and Roosters have a few similarities, but also some differences. A Dog-Rooster relationship can be very challenging for a Dog. Before you commit to a serious relationship, make sure that you both get to know each other. Work hard at communicating what will, and will not, be acceptable in your life together before you commit.

If you can’t handle your significant other taking excessive risks, make sure that your prospective partner will be happy without doing so because otherwise, it will be a constant bone of contention. Keep in mind that your Rooster’s behavior that you may find attractive while dating could be annoying in a long-term relationship. Also, make sure you are comfortable with your Rooster’s needs and desires before committing to a long-term Dog and Rooster compatibility.