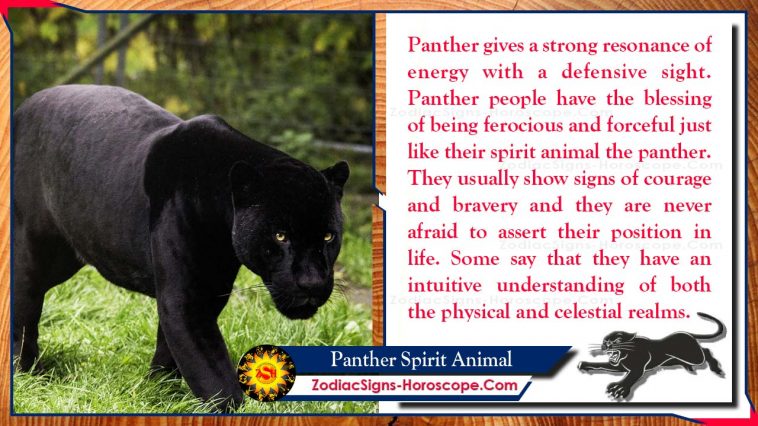 Description of the Panther Animal Totem

The Panther or Black Panther is one of the most magnificent members of the cat family. They vary in sizes and colors, and they live mostly in Africa and Asia. The ones that are in Africa are primarily leopards, while the ones in Asia are jaguars. They are a potent symbol in the totemic world and also in literature. They instead have bad energy resonance as they attribute mostly violence and cunning traits. Therefore, most people are afraid of them, but they also appreciate their magnificence.

Meaning of the Panther Spirit Animal

The panther gives a strong resonance of energy with a defensive sight. The panther people have the blessing of being ferocious and forceful, just like their spirit animal, the panther. They usually show signs of courage and bravery, and they are never afraid to assert their position in life. Some say that they have an intuitive understanding of both the physical and celestial realms.

The black panther of all the panther is the one that many people don’t understand the most. However, the little that we can draw from it is motherhood, association to the dark moon, and the power of the darkness. The black panther symbolizes the need for us to feel at ease and learn the benefits of moving around in the dark.

The Panther portrays positive traits despite having negative energy as an animal. Saw the people of the panther spirit animal could emulate the characteristics of the panther to have a peaceful, meaningful life. Some of the many aspects of the panther are:

This animal totem is quite protective of their space and young ones. They always mask their territory by peeing all over its boundaries and within its borders to warn off fellow predators. Thus if one ignores the warning, they should be ready for a showdown cause it will be on. They don’t let anything near their children or their personal space.

This symbol translates into the panther people. They are also protective of their space and don’t like sharing. They believe in the territorial domain, even in the workplace. But even at home, if they keep something in the fridge, they expect to find it there or else there shall be hell to pay.

The panther has a very significant look that is mean and scary. This gives it a magnificent, powerful look that tends to warn of most animals. Plus, the panther also has strong limbs and powerful jaws that they use to crush the bones of their prey.

The Panthers are quite huge, depending on the ones one is referring to. Also, they have a masculine look that complements their ability to catch and suffocate their prey by biting on their throats or nostrils and mouth. Furthermore, they are also quite heavy for their size and have potent paws. They rely on their strength to hunt since, most of the time, their prey seems to outrun them. They, therefore, wait in hiding on top of trees and pounce at the very last minute.

The people belonging to the panther spirit guide can emulate these attributes to help them get ahead in life. They use the opportunity of strength to show who is boss. Also, they can lay in wait for a chance to come along and jump on it at the very last second.

Symbolic Meaning of the Panther Dream

Do you see a Panther in your dreams?

The divine world also sends the panther people dreams as well. Some say when you see a panther in the dream; it means that theirs is protection in your life or that you are just safe. However, some cultures believe that the panther symbolizes bad luck and therefore represents the symbol of an enemy. This duality gives the panther dream real juice making it compelling.

Also, the panther not only stands for power but also courage, beauty, and grace. It encourages the ladies to manifest their feminine energy of nurturing and protection to help them take care of their children. They can also rest easy when they dream about the panther because the divine world is reminding them of their magnificent beauty like the Panthers.

The panther is a category of many cats that include pumas, jaguars, leopards, and black panthers, among many more. They have negative energy about them, and many people tend to stay away from them in general. However, the panther also has positive traits that they manifest in the panther people as their spirit animal.

The panther power animal also manifests itself into other people’s dreams and presents guidance from the spirit world. Many people believe that the panther people are born with extensive knowledge of the spiritual world and even ours. Therefore, they don’t have a lot of problems adjusting to this world.