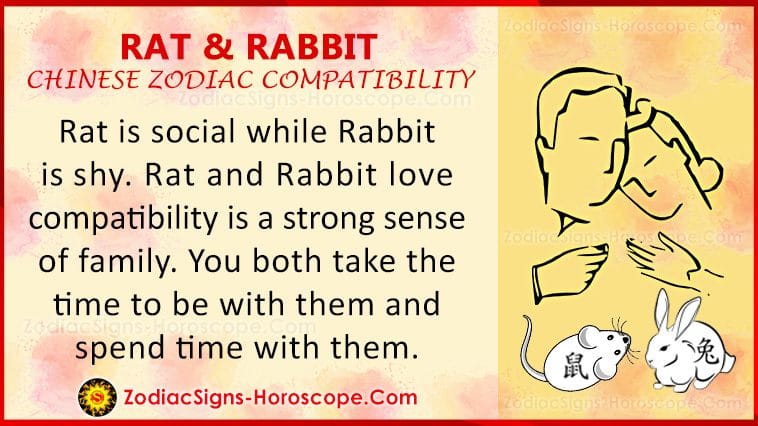 According to Chinese traditions, everyone is born under one of the twelve signs of the Chinese zodiac. An animal represents all of these signs. Your sign can show you more about your personality that is unique to you and those born during those years. Not only that, but you can also get an idea of the characteristics that are associated with people you know. Do you get along better with your new boss compared to your old boss? It may be because the zodiac signs of you and your first boss were not compatible. You may wish that you knew that sooner. The same is true when you are dating and searching for love compatibility. If you are a Rat, can you have a Rat and Rabbit compatibility?

A rat out in nature may be small, but they are capable of doing many things because of their intelligence. They know how to find and use their resources to their advantage. They also work well with others to achieve their goal. A family is important to them. All of these traits are the same positive traits for those born in the Year of the Chinese Rat. You have learned to adapt to whatever life throws your way.

You probably learned your most important skills in your career in the field rather than in the classroom. Still learning as you aim to meet or exceed your expectations. People are attracted to you for your looks and your sociable personality, but that doesn’t necessarily mean that you are bound to be besties. They need to earn your trust before they can even be eligible for that position.

When you think of a rabbit in your yard or the woods, you probably think of a warm animal who is so meek and mild that they would not hurt anything more dangerous than a clover. They are also quiet, which prepares them for quick getaways from loud noises or some predator. If you were born in the Year of the Rabbit zodiac sign, you are all of these things and more.

You have an elegance about you that may come across as superficial to some. It doesn’t matter because you have an air of grace and honesty, but also a look in your eye that confirms that you will not be discouraged when there is a problem. You may not speak your mind much during Rat and Rabbit dating, which can be creative and imaginative. Still, you lack a sense of adventure when you hold on to your conservative ways.

It may be hard to believe it sometimes, but opposites do attract. Rat is social while Rabbit is shy. Once you get past the hurdles of a meeting, you will see that there is something about the Rat and the Rabbit that makes you one of the most compatible signs in a love relationship. Rat & Rabbit soulmates are clever signs, but that is not all that you share in common. Your personalities may be different in many ways, but you can still put in the effort that matches your dedication to each other.

The personality differences between Rat & Rabbit zodiac signs complement each other in a way that can be to both of their advantages. Rat is outgoing and very social compared to the calm manner of Rabbit. For Rabbit, your partner may be able to get you out a little more and mentor you to be a little more outspoken about your thoughts and concerns. For Rat, the advantage that you can gain out of this relationship is one that can affect your health and happiness.

Often, you are taking on many tasks because you have to accomplish them in your life. The problem is when you take on too much at once. Also, you became anxious and stressed when it comes closer to a deadline. Rabbit has a sense of calm that can help you relax and learn how to slow your pace to bring back the quality of your work rather than the quantity. Rat with Rabbit in love can be rational signs so you can understand what they see when you have stress headaches or other symptoms of anxiety.

One of the things you have in common in a Rat Rabbit love compatibility is a strong sense of family. You both take the time to be with them and spend time with them. The same is true with your friends. The rat may not make many good friends in their life, but the ones they have are very special to them.

Sometimes it is the differences between two personalities that bring conflict rather than compatibility. Rat Rabbit in love is two socially different signs. Rat is outgoing and enjoys spending time with people, whether you are networking or hanging out with friends. Rabbit is shy but easy to get along with. You may not be the first to introduce yourself, but people enjoy spending time with you and your sense of calm. However, Rat may want to be more active outside of the home, and Rabbit may not care to join you every time.

A rat can get lively to the point that you come across with an attitude that can be annoying or nagging. If you try that with Rabbit in a Rat with Rabbit marriage, they will not appreciate it at all. Rabbit, you will likely stop it with a look. It will not take much for you to decide that if it is not curbed that you would not be shy about moving on to a relationship without that kind of behavior.

The rat does know how to handle an argument during Rat-Rabbit communication. You can dominate arguments and fights easily because you know that Rabbit will either back down or just agree in the end. This can also be true in the bedroom. Over time, rabbits will resent that they cannot speak their mind. Even if the cause is your shyness, you may place that blame on your lover. Without an open mind or open communication for compromise, this can make or break a relationship.

There are a lot of good qualities in a Rat & Rabbit relationship. You can be great friends that get along because you complement each other rather than compete with each other. A rat can take care of their partner with love, support, and encouragement. Rabbit can show Rat the benefits of slowing down for their physical and mental health. For this relationship to survive years of love and marriage, you need to have an emotional connection.

The rat has to determine if it is essential for them to win every argument and get their way because they can do so. Rabbit has to decide how much they care for their partner and if it is worth dealing with their possessive attitude every day. The efforts that you put into your Rat and Rabbit compatibility and the happiness of your partner will be enough to make your love compatibility stronger. 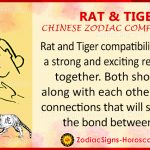 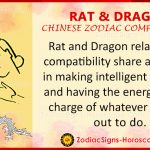